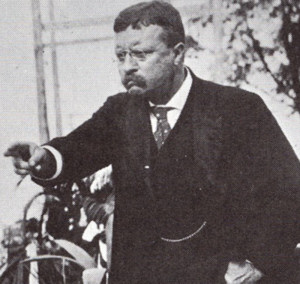 The last thing you saw before a brutal ass-kicking.

"Speak softly and carry a big stick; you will go far."

"Death had to take him sleeping, for if Roosevelt had been awake, there would have been a fight."

Theodore Roosevelt (also known as "Teddy" or "T.R.") is known for having been in the cavalry, leading the Rough Riders' charge on San Juan Hill, commissioning the Panama Canal, creating the US National Park System, and saying "speak softly, but carry a big stick" (the aircraft carrier USS Theodore Roosevelt is called "the big stick" by its crew). Before he became the 26th President of the United States, he was a governor, historian, adventurer, police chief, cavalryman, cowboy, explorer, hunter, naturalist, Assistant Secretary of the Navy, author of 35 books, conservationist, etc. He was a larger-than-life figure with a bombastic reputation as a total Badass.

He was once shot in the chest on the way to give a speech. Fortunately for him, his eyeglass case and the folded speech were in the path of the bullet. Since he wasn't coughing blood afterwards, he figured he was fine[1], and delivered the hour-and-a-half long speech before seeking medical attention.

He was a Real Life example of Reassignment Backfire; the Republican Party (specifically, the corrupt political machines that grafted votes from immigrants) became sick of his grandstanding as a Governor of New York and appointed him Vice President, where it was assumed that he'd be powerless. Less than a year later, President McKinley was assassinated, making Teddy President, and stirring several comments along the lines of "That damn cowboy is gonna be the president?!" Teddy went on to be elected in his own right in 1904 (the first "Accidental President" to do so), won the Nobel Peace Prize (while still in office) for brokering a peace deal between the warring Japanese and Russian Empires (becoming the first US President to win the award), sent a US fleet on a nonviolent global cruise (which was more of a global series of parties really) to show the naval strength of the US, then stepped aside at the end of his second term so that William Howard Taft could be elected President.

Over the next four years, however, Roosevelt grew to dislike Taft and his governing (Taft drifted towards the conservative wing of the Republicans, while Teddy was of the liberal, Progressive wing), and decided to challenge him for the Republican nomination. When that didn't work, Roosevelt actually formed his own political party (the Progressive Party, also known by the more badass name of the Bull Moose Party) so that he could run against Taft in the 1912 election. This wound up splitting the vote and allowing Woodrow Wilson to win the election (thus showing why third parties don't last long on the national stage), but Teddy did end up getting more votes than Taft -- the second and last time (not counting the spectacularly messed-up election of 1860) that a third-party candidate placed second or higher in a US Presidential election. (Abraham Lincoln was elected in 1864 on the Union Party ticket, although that is also kinda messed up.[2])

Ironically enough, the other president to have that last name was a Democrat, whereas Teddy was a Republican (they were fifth-cousins; Franklin's wife Eleanor was actually TR's niece). Franklin, in fact, went with the Democratic Party in order to avoid being drowned out by his distant cousin's reputation in the Republicans.

Teddy was also a real-life example of a Gentleman Adventurer and Egomaniac Hunter. He was a big conservationist, eager to make sure he'd always have something to hunt. The "teddy bear" is named after him, because he refused to shoot a black bear cub just for the sake of it. The bear was put down -- the rest of his family had been already shot. Foreign ambassadors dreaded meeting him, as it usually meant that they would have to accompany him on his strenuous daily jog, with him making fun of them when they inevitably ran short of breath and started lagging behind. Edith Roosevelt, Teddy's second wife, was a real-life example of a Victorious Childhood Friend -- she had been a childhood playmate of his.

He was also a famed adventurer, famously taking a big game hunt to Africa shortly after leaving the White House and later exploring an uncharted tributary of the Amazon River. Words alone can not describe the impressiveness of this later feat. This is chronicled in the book River of Doubt.

After he was through with it, it had to be renamed the River of UNQUESTIONABLE CERTAINTY!

In case it wasn't clear by now, he was made of pure, condensed Badass, and is often portrayed as even more so than he already was. Within his own lifetime, historian Henry Adams explicitly compared him to God. In fiction, he is frequently portrayed as a Large Ham, in keeping with his boisterous nature and public persona. At her wedding, his daughter, Alice, stated that "My father wants to be the bride at every wedding, the corpse at every funeral, and the baby at every christening." But she was giving as good as she got: Alice was a notorious handful, rambunctious, and known to the press as "Princess Alice." Her father had earlier snarked, "I can either run the country, or attend to Alice. I cannot possibly do both." Teddy also had a son whom he named Kermit (THAT SHOWED HIM) who joined him on some of his expeditions.[3]

Film of President Roosevelt can be found here as he was the first President to have most of his professional career documented on film; from the Rough Riders to his death.

It Takes More Than Tropes to Stop a Bull Moose!

"When Roosevelt read [my] book, he came....No one ever helped as he did. For two years we were brothers in (New York City's crime-ridden) Mulberry Street. When he left I had seen its golden age.... There is very little ease where Theodore Roosevelt leads, as we all of us found out. The lawbreaker found it out who predicted scornfully that he would “knuckle down to politics the way they all did,” and lived to respect him, though he swore at him, as the one of them all who was stronger than pull....that was what made the age golden, that for the first time a moral purpose came into the street. In the light of it everything was transformed.

Theodore Roosevelt and his son Kermit explored Brazil's legendary River of Doubt. After they were done, it was renamed THE RIVER OF UNQUESTIONABLE CERTAINTY.