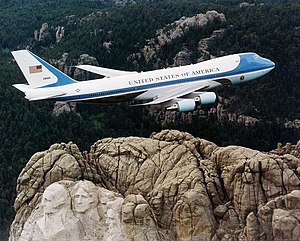 Not the movie- that should go under Air Force One.

"Air Force One" is actually the call-sign given to any US Air Force aircraft that the President of the United States currently happens to be onboard. This could range from anything from a T-38 Talon trainer jet (the President would be the back-seater...we hope) to an interstellar battle cruiser. If the Commander-in-Chief is on a civilian flight (which has happened once: Nixon, while President, rode on an ordinary United Air Lines flight), it's "Executive One". "Marine One" for a Marine aircraft, "Navy One" for a naval aircraft, etc. "Marine One" is also the name given to the President's helicopter- we'll discuss that here. The Vice-President has "Air Force Two" and "Marine Two".

In practice, however, since 1990 Air Force One has been one of two VC-25A aircraft operated by the 1st Airlift Squadron, 89th Airlift Wing. The VC-25A is a heavily modified military version of the Boeing 747-200B, and the current two planes have tail numbers 28000 or 29000. During transport missions where the President or Vice President is not on board, these aircraft use the callsigns "SAM 28000" and "SAM 29000" (short for Special Air Mission). When President Nixon flew back to California after announcing his resignation, the plane was known as "Air Force One," until Gerald Ford was sworn in at noon, then the pilot called air traffic control and said, "Air Force One changing call signs. Air Force One is now SAM 28000."

When the aircraft is not carrying passengers (usually for pilot training) it uses the 89th Air Wing call sign "Venus" followed by a flight number. Besides the highly recognizable VC-25As, the President has access to slightly smaller aircraft - at least four C-40Bs (modified Boeing 737, entered service in 2002) and at least four C-32s (modified Boeing 757, entered service in 1998). These normally serve as transport for the Vice President (under the callsign "Air Force Two"), but the President will use them when the VC-25A is not practical - e.g., for shorter trips, or when the destination airport can't handle such a large aircraft.

Before that, Air Force One was a Boeing 707; one of these is on display in the Ronald Reagan Presidential Library, one is at the National Museum of the United States Air Force in Dayton, Ohio and another is at the Museum of Flight in Seattle.

The VC-25A features medical facilities, a pharmacy and 85 telephones. The President can launch Superior Firepower from here. It has the capacity for 76 passengers and their cargo, but several other aircraft are needed for everyone else that goes with a President on his or her travels.

Precise defensive capabilities are classified, but there are almost certainly flares, a vast array of jamming equipment, and the aircraft can survive the EMP of a nuclear explosion.

No, it doesn't have an escape capsule. Probably.

There are several different ones of these. Most commonly seen are the VH-3A, a version of the Navy's Sikorsky SH-3 Sea King, and the VH-60N, modified from the UH-60 Blackhawk airframe. The plan was to replace these with VH-71 Kestrel choppers (AgustaWestland AW101s, aka the Merlin, as used by the Brits With Battleships), but this plan is currently canceled due to cost over-runs. In addition to the huge cost, politics was involved, as it did not look good to spend such a massive amount of money during a recession. Even with the massive cost over-runs, it appears it will actually cost more to keep the current fleet, due to the costs of maintaining and upgrading the aging fleet.

Since the 1980s or 90s, Marine One never flies alone when the President is on board. Three or more identical helicopters play a Shell Game to prevent any assassin from knowing which one has the President on board. This is part of the reason why the planned replacement was so expensive, the plan called for 28 helicopters.

Several will be transported with the President when he or she goes abroad.

The pilots all have to have Yankee White background checks (the same one required to carry the "nuclear football", which is thought to contain the information needed for the President to launch Superior Firepower and the means to do it - but not the actual codes to allow him or her to do so).

Examples of Air Force One include:

Retrieved from "https://allthetropes.org/w/index.php?title=Air_Force_One&oldid=1747703"
Categories:
Cookies help us deliver our services. By using our services, you agree to our use of cookies.