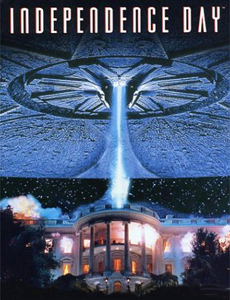 Independence Day is a 1996 movie by Roland Emmerich, known in its promotional material as ID4. At its core it is a straightforward Alien Invasion movie with a lot of elements taken from well known sources like The War of the Worlds. The archetypical Summer Blockbuster with a large cast of familiar character types, Stuff Blowing Up, fighter jets dogfighting alien craft, Rousing Speeches, Area 51 and is otherwise fairly by-the-book story-wise.

President Whitmore (Bill Pullman) is the recently elected U.S. President when a massive (one-fourth the size of the moon) spaceship enters the orbit of Earth. Sending out smaller (city-size) ships that scatter across the globe to all the major cities, it doesn't take long before they begin firing their Wave Motion Guns to wipe out entire cities at a time.

Humans fight back, with U. S. Marine pilot Steven Hiller (Will Smith) and computer programmer David Levinson (uh... Jeff Goldblum) pulling together a Plan to save the human race.

The film's success also kicked off a revival of the Disaster Movie in mid-to-late 90s. The influence of this film can be seen even today, with Roland Emmerich himself repeating a similar formula in his later films like Godzilla, The Day After Tomorrow and 2012.

Apparently not one, but two, sequels were planned as of 2009. Independence Day: Resurgence was released in 2016.

Tropes used in Independence Day include:
Retrieved from "https://allthetropes.org/w/index.php?title=Independence_Day&oldid=1838662"
Categories:
Cookies help us deliver our services. By using our services, you agree to our use of cookies.