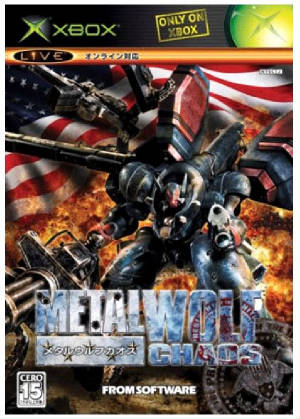 Michael Wilson, veteran of the Arizona Conflict and 47th President of the United States, has been deposed in a military coup by his running mate Richard Hawk. Now, he must take up the guise of Metal Wolf and take back America city by city, armed only with his Mini-Mecha and the power of burning American freedom.

A game this American could only have been made in Japan.

Metal Wolf Chaos is an original Xbox game made by From Software, unfortunately (and weirdly) never released in America. The game is a Mecha title focused around the highly American pursuit of blowing stuff up, with a plot and dialog that is the epitome of Hot-Blooded American Patriotic Fervor, regardless of coming from a different country altogether. Weaponry includes machine guns, rocket launchers, and a shark gun - yes, a shark gun - while the plot takes you to shootouts in the southwest, bomb threats in Beverly Hills, mangling mechas in Manhattan, redecorating the White House with missiles, a showdown with Richard in Vegas, and space, assisted along the way by a resistance force skilled only in blocking tank cannons with their helicopters and the President's slightly psychotic secretary Jodie Crawford.

While originally planned for an English release, the release was canceled after 9/11. Thanks to the Xbox's horrific failure in Japan the game quickly became impossible to find legitimately. This changed in 2016 when publisher Revolver Digital solicited From Software with an offer to port the game to modern systems. This offer was accepted and a port to PC, PS4 and Xbox One was confirmed in 2018 with a release set for mid-2019 (possibly July 4th).

Troper General's Warning: Prolonged exposure to this article or its tropes may cause you to develop the delusion that Metal Wolf Chaos is not a real game. The Troper General's Office recommends treatment through proportional use of videos of the game in action.

This game provides (hilarious) examples of:
Retrieved from "https://allthetropes.org/w/index.php?title=Metal_Wolf_Chaos&oldid=1758693"
Categories:
Cookies help us deliver our services. By using our services, you agree to our use of cookies.