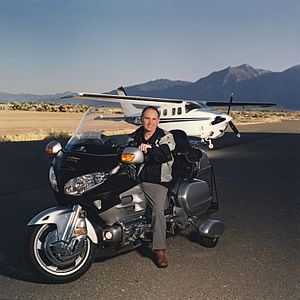 Then he retired and started writing books. These books involve super-planes, such as the EB-52 Megafortress, a stealth escort bomber. They also sometimes involve nukes being let off. The main plotline through most of his stories involves USAF bomber navigator Patrick McLanahan and his involvement with the super-secret High Technology Aerospace Weapons Center "Dreamland".

He made the plot for a Real Time Strategy game, Act of War, which features some of the tropes found in his books.

Works written by Dale Brown include:

As a Long Running Book Series - Flight of the Old Dog was released in 1987 - beware Late Arrival Spoilers.

Dale Brown provides examples of the following tropes:
Retrieved from "https://allthetropes.org/w/index.php?title=Dale_Brown&oldid=1685392"
Categories:
Cookies help us deliver our services. By using our services, you agree to our use of cookies.