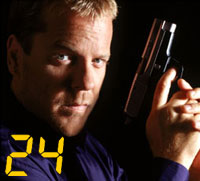 Spoilers ahoy! Read at your own risk. You Have Been Warned.

Hit US TV Series starring Kiefer Sutherland as Jack Bauer, agent for a fictional US government agency, during eight very bad days. Each season of the series takes place in Real Time over the course of a 24-hour period (each episode is one hour out of that day), during which Jack is called into service to stop a terrorist threat.

The first season revolved around an assassination plot on presidential candidate David Palmer. Jack's wife and daughter are kidnapped to make him assassinate Palmer on the terrorists' behalf; the only link the two of them have was a covert wetworks operation in Sarajevo, which turns out to be the motivation for the day's plots.

Each season since then has revolved around a large-scale terrorist threat to a major US city, usually backed up by a Crazy Prepared Big Bad, a well-thought-out Evil Plan, and, sometimes, a Diabolical Mastermind. So far, the threats have been nuclear bombs, a bio-weapon, a nerve agent and more nuclear bombs, with some presidential assassinations along the way. All in a day's work, eh?

24 can be seen as a throwback to earlier works: a Dirty Harry for the War on Terror, or even a Republic Serial for the 21st century.

The Hollywood Writers' Strike of 2007/8 kept the series off the air during 2008, with the exception of a two-hour Made for TV Movie, Redemption, which aired in November 2008 and acted as a Prequel for the seventh season. The seventh season was a Retool which moved the action to the East Coast and generally improved on the fairly mediocre Season 6. Season 8 premiered on 17 January 2010 and moved the action again, this time to New York. The eighth season was the final season, and the show finished its run on 24 May 2010. The Movie, hinted at as early as Season 5, was scheduled to begin shooting in Spring 2012 but has been put on hold by Twentieth Century Fox due to budgetary issues. But as of May 2014: Jack is Back! The new series will be called 24: Live Another Day consisting of 12 episodes. The series was followed by a Spin-Off, 24 Legacy, which premiered in 2017

Retrieved from "https://allthetropes.org/w/index.php?title=24&oldid=1742173"
Categories:
Cookies help us deliver our services. By using our services, you agree to our use of cookies.