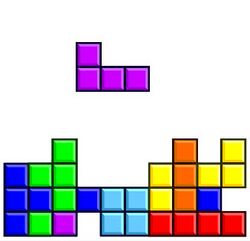 The concept is exceedingly simple. Tetriminoes[1] (puzzle pieces made from four square blocks) are falling down the screen, and you must arrange them into lines by moving them around your workspace and rotating them. Once you form a line, all blocks in that line vanish, and everything above them falls down one level. You gain more points for making multiple lines at once -- in the standard rules, the maximum number of lines that you can make at once is four, a "Tetris".

As you continue to play, the blocks fall faster and faster. If they reach the top of the play area, the game is over.

First released in 1985, Tetris products or other programs implementing the same game rules have appeared on nearly every video game console, computer operating system, graphing calculator, mobile phone, and PDA ever released, as well as the lighting systems for a couple of buildings (its simplicity makes porting it very easy). By far, however, the most famous and popular version was released on the Nintendo Game Boy in 1989, bundled with the system upon its release (and becoming its Killer App at the same time). The first of that version's three musical options, a Russian folk song called "Korobeiniki" (although the game just referred to it as "Music A"), has become an iconic (and catchy) piece of video game music.

Tetris may well be one of the most beloved video games in the history of the craft, enjoyed by hardcore gamers and nongamers alike. There are few gamers who haven't stared at a screen and muttered, "All I need is one straight line... just one..."

Arika's arcade version of Tetris, called Tetris the Grand Master, features a few deceptively simple changes that transform Tetris from a classic action puzzle game into nothing less than the most cognitively strenuous high-speed twitch game ever devised.[2] But, due to the creator's frustration with clones of that game, its future is bleak.

An official online version of the game is available at Tetris Friends.[3] There's even talk of a movie version, or maybe even more than one, but for now they seem to be in Development Hell. (No, seriously, it's even gotten as far as a trailer.) See also: Tetris Wiki, The Tetris Effect.

Tetris and games developed by fans of Tetris can contain examples of:

Contrary to popular belief, the Russians did invade during the Cold War -- it just went unnoticed, because they were crafty about it. Their invasion was called "Тетрис".

Retrieved from "https://allthetropes.org/w/index.php?title=Tetris&oldid=1946160"
Categories:
Cookies help us deliver our services. By using our services, you agree to our use of cookies.