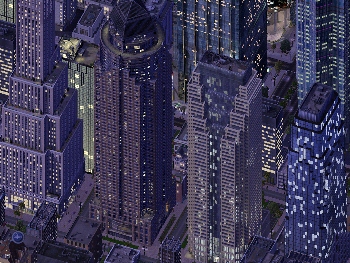 Downtown, there's no finer place for sure!

A Simulation Game released in 1989, and the first "Sim" game by Will Wright. It's been around for a while: it could be played on first-generation Apple Macintoshes (i.e. the ones with black-and-white screens).

It shouldn't be confused with Sin City, unless you forget to build police stations. Or are playing on the appropriate map.

You are the mayor of a city which is inhabited by Sims. You build the roads and infrastructure (power plants and other utilities, schools, etc.), you allocate the zones where your Sims will live and work, and the Sims decide where they want to live and what they want to do and (depending on tax policies) how many Simoleons they will pay you. You will need that money to maintain and increase the infrastructure. Natural disasters also happen on occasion, and you can even cause them on purpose.

Eventually, SimCity proved to be so successful, it managed to spawn 5 sequels over 18 years:

Unlike The Sims, SimCity requires you to work above the level of the individual Sim. You are managing a city, and what you do will affect dozens to millions of Sims at least minimum..

The game is open-ended. There is no win condition (although in 2000 if you've built enough launch arcologies, "the exodus" occurs and all your sims fly off to live in space), but it is not an Endless Game either; you can tell if you're doing better or worse, but you can keep doing it as long as you want, resources permitting. It should be noted, however, that certain versions of the game do have a Game Over scenario. For example, certain ports of SimCity 2000 and 3000 will end with you getting kicked out of office if your city's treasury enters the red for a certain period of time.

The series also spawned a number of spin-offs other than The Sims, some of which are listed below. Most of them tend to be "SimCity meets such-and-such."

Tropes used in SimCity include:
Retrieved from "https://allthetropes.org/w/index.php?title=SimCity&oldid=1723328"
Categories:
Cookies help us deliver our services. By using our services, you agree to our use of cookies.