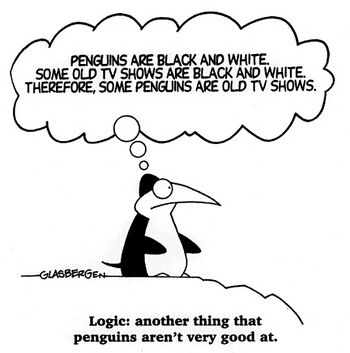 In order to make this work, any time wine is referenced in a positive context (for example, Jesus' first miracle), the word is instead rendered as "unfermented grape juice" when translated into English.

A very common form of Guilt by Association is "Hitler did it, therefore it's bad." While persuasive, it's not always true, since while Hitler did a lot of evil things, he also was a massive advocate of animal rights (well, definitely more so than Jewish, gay, or Gypsy rights...), built motorways, painted pictures, hosted the Olympics, ate sugar, and breathed oxygen. This is related to the Fallacy of Division, since it assumes the evilness of the whole of Hitler also applies to any part of Hitler. Related to Godwin's Law and Hitler Ate Sugar.

The flip side of Guilt by Association, stating that two things share a positive quality because they share a different, unrelated quality.

Retrieved from "https://allthetropes.org/w/index.php?title=Association_Fallacy&oldid=1782553"
Categories:
Cookies help us deliver our services. By using our services, you agree to our use of cookies.