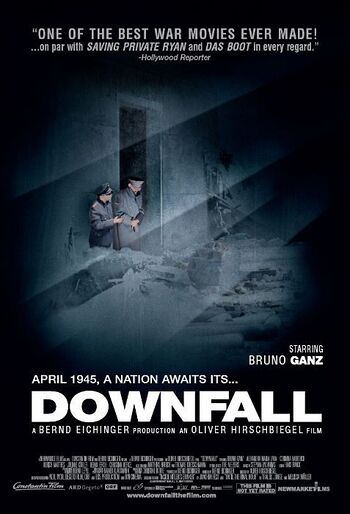 Downfall (German, Der Untergang) is a dramatic film from 2004 set around the last days of Nazi Germany, as the Soviets invade and destroy Berlin, and the senior Nazi leadership are just waiting around to die.

It is primarily based on the memoirs of Traudl Junge, one of Adolf Hitler's secretaries, and is one of the most accurate portrayals of the last, desperate days of the Third Reich and its effects on Hitler, his closest aides, and ordinary Germans, though the ending has been criticized for implying that little or no harm came to the surviving women in the bunker, as opposed to the widely promoted allegation that many of them were raped or brutalized by the Soviet soldiers.

You most likely know it as the source of all those Hitler Rants videos where the English subtitles are edited to satirize some usually trivial topic.

Not to be confused with the ABC big-money prize-smashing game show of the same title. Or the board game of the same name.

Tropes used in Downfall (film) include:
Retrieved from "https://allthetropes.org/w/index.php?title=Downfall_(film)&oldid=1692440"
Categories:
Cookies help us deliver our services. By using our services, you agree to our use of cookies.