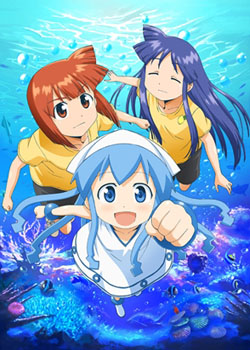 The Lemon Beach House, run by the Aizawa sisters, is booming with customers in the middle of the summer. This peace will be short-lived. A girl calling herself "Ika Musume" (Squid Girl) emerges from the sea, stating her goal of taking over the world as a revenge on humanity for polluting the oceans. This army of one has a long way to go, though. When she breaks a large hole in the beach house, the sisters force Ika to work for them until she can pay for the repairs. Thus begins a cute comedy about the friends at the Lemon Beach House and world domination... supposedly.

Squid Girl, known in Japan as Shinryaku! Ika Musume (侵略!イカ娘, literally Invade! Squid Girl) with the subtitle The invader comes from the bottom of the sea!, is a manga by Masahiro Anbe that was adapted into a Twelve-Episode Anime in fall 2010. In North America, it was originally licensed and dubbed by Media Blasters, and was later license-rescued and released on Blu-ray by Sentai Filmworks.

Both seasons can be watched legally on Crunchyroll.

Tropes used in Squid Girl include:

Ika: It's like she is trying to make up for lost time in one panel.

Eiko: How odd... (because of the squid portions)

Ika: Oh? About what? (while being dragged by Chizuru to a room)

Cindy: Thank you for watching!

Eiko: I don't even want to imagine the relationship map for this.

Ika: "Why do I have to be good at everything but invading, de geso~?!"

Sanae: I'm not a suspicious person! I wasn't trying to eavesdrop on your conversation or anything! Not at all!

Eiko: "How can you eat that after watching her vomit?"

Ika: "What kind of lame wage are you paying me, de geso?"