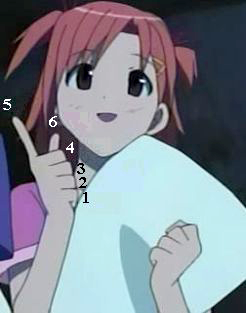 "I wish the art was good throughout the whole series, not just in the final episode."
"These days, anime has good art in the first and last episodes, never in the middle."


"That's not something you can just fix for DVD release."
—A bunch of ninjas in the final episode of Ninin ga Shinobuden.

When a production company decides that the important episodes (i.e. pilots, whams, and finales) of a show get priority, other episodes (like Filler) will, to conserve production costs, be drawn with only the bare minimum of framework that they absolutely must have.

Long running shows suffering from budget issues will start resorting to thinly veiled camera tricks. The movement and even design of characters will start to slip, especially if the show is bothering to animate heavy action scenes. When they are animated, fight scenes will become Fight Unscenes.

The prevalence of computer-inked animation in recent years merely assures that colors stay consistent. Off model refers to the character model (on a model sheet), which is what the animators are supposed to base their drawings on. Another important step is animation checking, which may be skimped on when time or money is short.

Fans are typically not pleased, and it is very common for companies to announce they're fixing up things for the inevitable DVD release.

However, Tropes Are Not Bad. Cartoonist John Kricfalusi has repeatedly stated that "staying on model is only for wimps and communists", or more subtly, if you don't break the character's model to emphasize some emotions, it'd be just as good done live action. Squash and stretch can be considered off-model, but it is one of The Twelve Principles of Animation. The result of staying true to off-model animation is fantastic, in Kricfalusi's case. Walt Disney Animation Australia, Carbunkle Cartoons and Star Toons are also examples. However, their use of it is Depending on the Artist taken Up to Eleven, rather than accidental off model.

See also Uncanny Valley and Deranged Animation. Contrast Animation Bump, where the animation is suddenly much better made than usual. Compare Special Effect Failure, a similar trope, but with live action (and with animation that mixes more than one form of it). For animation studios that screw up constantly unintentionally, see AKOM, Studio DEEN, Dong Woo Animation, Studio Shaft, Sunrise, Actas, Tokyo Kids,[2] and Toei Animation (mainly their unit the The Philippines).[3] For a studio whose supporters and critics often argue about whether their animation is this, see Kennedy Cartoons.

Note: If a show has constant instances of Off Model, then list notable examples of it. In addition, try to avoid typing Zero Context Examples.

Examples of Off-Model include:

Prince John: No, no, I lose more jewels that way...

Snowflake: You fool! Do you realize what you have done??
Takahashi: You started the fight scene! Now we're all going to be drawn by the... 3rd String Backup Animation Team!!
Glutes: My God, what have I done? AAAAAAAAA! WHAT THE FUCK IS HAPPENING TO MY BODY??

A curly ram horn is actually a pretty complicated object. I draw fast and loose and a lot of times emphasize gesture and stylization over precision. If you're looking for rigid fidelity to a couple of loopy horns I am afraid you're barking up the wrong tree! They curl whatever way looks best for the scene.

Freakazoid: Oy, let's watch the lip-sync, alright?
(cut to a pair of lips sinking into the ocean)
Freakazoid: A-thank-ya.