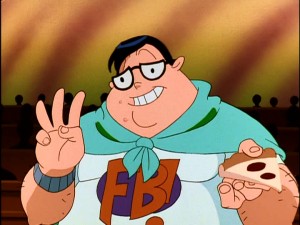 Don't worry, it's not always this bad.

It's true that it is always the winners that write history. But it is the losers that do the Transformers Wikipedia entry.
—Starscream

The term used for obsessive fans of a particular activity that goes a bit too far onto the creepy side. Unlike fangirls (which usually refers to women obsessed with characters and their relationships with either other characters or themselves to the exclusion of the rest of the elements of the canon), the term "fanboy" is usually reserved for antisocial people with a self-inflated ego over their knowledge and/or mastery of the topic in question, often parading it around and belittling those around him. They are to fandoms what ""Stop Having Fun!" Guys" are to tournament rules.

A major difference between fanboys and fangirls is how they approach the show in question. Fangirls are usually more attracted by the characters (both their looks and their personalities) than by any other aspect of the show, whereas fanboys often become obsessively attached to the show's creators. Prime examples are South Park fanboys who can barely get a sentence out without repeating the phrase "Matt and Trey" six times over, and Star Trek fanboys who obsess over how Paramount has supposedly ruined "Gene's vision", not taking into consideration that Gene's real (and honourable) vision was to earn money to support his family. Fanboys are consequently much more attracted to the authorized than the unauthorized, because owning authorized items gives them a feeling of connection to the creator who authorized them and because spending money on an item means to them that the item has some value. This attitude sometimes leads fanboys to mock and disrespect traditionally female fan activities such as filking and fanfiction (after all, if you don't have approval and you don't pay for it, it must be worthless, right?), but it also leads them to spend precious money on vastly overpriced items simply so they can have that official, authorized connection to the show and its creator. As was once said: fans buy the Spider-Man comic book; fangirls write love stories about Spider-Man and Mary Jane; fanboys spend $129.99 on a tacky statue of Mary Jane doing Spider-Man's laundry that should really cost about eight bucks.[1]

The Fan Boy is usually the first one to belittle, put down, and mock anyone who suggests that there might be Ho Yay in a series, even if it was deliberately put there by the creators. Shockingly, he generally reacts quite differently, and more favorably, to any possibility of Les Yay. One could say this was due to his own crushing insecurities, but it might just be that he expects a gay character to be different. At any event, he's the one who writes articles like No Yay and who whines about "brain bleach" if any character who isn't Camp Gay is even hinted to be slightly bisexual - and of course he'll never notice even the most blatantly obvious subtext, or he'll hotly deny that it exists after it's pointed out. Basically he expects Fan Service to service him and him alone, and squeals in rage if anyone suggests the show wasn't written for his viewing pleasure only. This has changed in some fandoms, but in others it's still just as prevalent as it was twenty years ago. In some, it's even worse.

With the term Fan Girl having come into prominence, fanboy is starting to see itself get used in the same way. However, when the term fanboy is used this way, it's usually suggesting something even more base about their sexual obsession. Whereas a stereotypical Fan Girl will usually find some base element in the personality of the character to fetishize over (although it definitely helps for the character to be handsome as well), a fanboy will usually just have discussions of a given female actor's physical attractiveness when it's not directly relevant (with almost no mention of personality unless it's something that contributes to fetish such as Moe innocence or an affinity for a particular hobby). For example, one poster on a forum may comment that Ms. Smith (who plays a Hot Scientist) appeared in an episode of a crime show. A fanboy will then comment that she wore some particularly tight jeans in that episode.

In the original Japanese, the term Otaku is synonymous with this, but also implies an almost stalker-like attitude as well as personal hygiene deficits. The original (very pejorative) meaning got lost when it was adopted by English language fans of Anime.

Examples of Fan Boy include:

"I jumped in the car when your mom stopped for gas: I'm just happy to be here!"