Everything About Fiction You Never Wanted to Know.
Jump to navigation Jump to search
/wiki/Bill Murraycreator 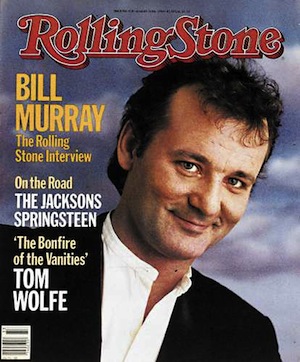 William "Bill" Murray is an American actor and comedian. He was born in September 21, 1950 in Wilmette, Illinois and first gained national exposure on Saturday Night Live after Chevy Chase left in the middle of season two and Lorne Michaels hired Murray as Chase's replacement. Though he is now considered one of the best cast member's SNL has ever had, Murray was not that well-liked by fans who were used to seeing Chevy Chase. When Chevy Chase came back to host on the show's third season, he and Murray got into a vicious fight backstage. When Chase came back to host during the show's fifth season, the two did a monologue together showing that all was forgiven. Among his most popular characters on the show was singing Lounge Lizard Nick Winters with his most famous sketch the one where he sings the Star Wars theme with added lyrics: Star Wars...nothing but Star Wars...

Murray went on to star in a number of critically and commercially successful comedic films including Stripes, Tootsie, Caddyshack, Ghostbusters, and Groundhog Day.

He gained additional critical acclaim later in his career, starring in Lost in Translation, for which he was nominated for an Academy Award, and a series of films directed by Wes Anderson, including Rushmore, The Royal Tenenbaums, The Life Aquatic With Steve Zissou and Fantastic Mr. Fox. He is widely regarded as one of the most talented and unique comedic actors of his generation.