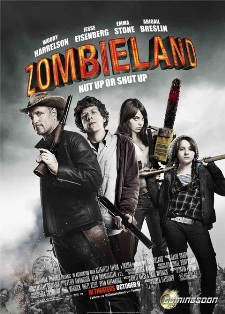 Nut up or shut up.

Some zombie films strive to evoke the terror of endless hordes of ravenous unstoppable undead advancing upon helpless, hopeless victims. Some show an exploration of the effects on civilization when The Virus moves in. Some spend their time showing military forces overrun by an enemy they're unprepared for. Some are a metaphor for zombies as victims of a materialistic, consumerism-driven society that gorges itself on pop culture and technology or are about a divided capitalist society headed by greedy fat cats, where the poor are exploited, or a desperate battle for survival. Some are even about the socio-political ramifications and aftermath of a zombie outbreak. A few try to trace the interpersonal problems (or lack thereof) that can result from a zombie attack.

Zombieland is a little more concerned with knocking their fuckin' teeth in.

It's the end of the world, so you might as well have some fun. You've seen the movies, now you get to live the life. Load up on shotguns, ammo, sledgehammers and banjos, because this is Zombieland—where your town is your name, where you must always beware of the bathroom, and where your biggest competition for Zombie Kill of the Week is a cheerful, cardigan-wearing nun.

A sequel was in the works, but was abandoned in favor of a half-hour TV show, which itself failed to be picked up after the Pilot Episode was broadcast in April 2013.

Has a Shout Out page.

Tropes used in Zombieland include:

The girl who used to live in Columbus' building before she became a zombie who Columbus refers to as '406' for her apartment number.
Nobody in the movie goes by their real name except for Bill Murray and Sister Cynthia Knickerbocker, which we can assume is her name because no-one would choose to go by that.