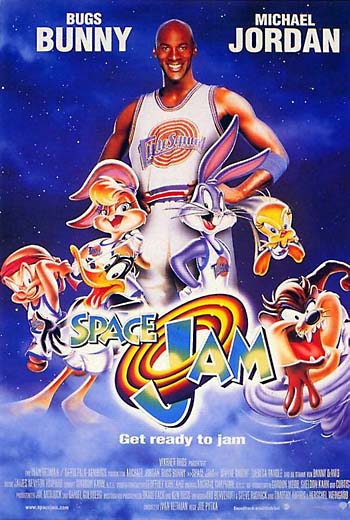 No, this is not related to the jam used in Spaceballs to block out a radar.

This 1996 live-action/animated film is what happens when you base a feature-length film upon a sneaker commercial. Really. Nike had ordered a few commercials featuring Michael Jordan and an animated Bugs Bunny facing off against alien cartoon characters.

In the film, the Looney Tunes must recruit NBA superstar Michael Jordan to play on their basketball team. They need Jordan's help because these aliens called Nerdlucks intend to kidnap them and make them the new attractions for their evil boss Swackhammer's evil theme park. Bugs, noting how tiny the Nerdlucks are, decides to challenge them to a basketball game.

This backfires when it turns out that the Nerdlucks can steal the "talent" from athletes (they do this to NBA players Charles Barkley, Patrick Ewing, Muggsy Bogues, Larry Johnson and Shawn Bradley in one of the movie's many, many subplots). This transforms them into the Monstars (aka --wait for it-- The Mean Team). This is where Michael Jordan comes in, but during the time period the film is set in, he had retired to play baseball. Thankfully, he wasn't drained of his skills and had actually just unretired at the time the film was made. [1] According to this film, saving the Looney Tunes is the reason why he returned to basketball.

The movie divides opinions to date.

The film was met with mixed reaction by critics, but was successful at the box office, with $230 million worldwide. It's not to be confused with Looney Tunes Back in Action, which is officially a Retcon (read, an attempt from Warner Bros to fix its Broken Base, which didn't work out so well financially; this is a polite way of saying it bombed massively).

Tropes used in Space Jam include:
Retrieved from "https://allthetropes.org/w/index.php?title=Space_Jam&oldid=1931806"
Categories:
Cookies help us deliver our services. By using our services, you agree to our use of cookies.