Everything About Fiction You Never Wanted to Know.
Jump to navigation Jump to search
/wiki/David Lettermancreator 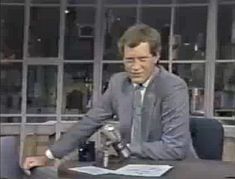 David Letterman (born 1947) is a late-night Talk Show host famous for defining the genre in the post-Johnny Carson era. Letterman's shows (The David Letterman Show in 1980, Late Night from 1982-93, and The Late Show since then) came to be known as examples of the "Anti-Talk Show", a show that is relentlessly self-aware and intent on deconstructing the conventions of the very medium that gives it life.

From the beginning, Letterman fashioned his persona as a smartass host that was "too hip" for the talk show format, and proceeded from there to make a mockery of the entire genre as a result — for instance, he would often barely hide his contempt for almost every aspect of show business, from his producers and writers, to his wardrobe director, his celebrity guests, his sidekick Paul Shaffer, and even his own fame. All of this pales, however, in comparison to his open contempt for his "rival," Jay Leno, to whom he lost the coveted Tonight Show gig after Carson's retirement, a development about which he is still clearly bitter some two decades later.

Letterman took frequent shots at his network (first NBC, then CBS), and then his network's parent company when NBC was acquired by General Electric. He would intentionally bomb jokes in the monologue, and openly waste network airtime on ridiculous gags whose only purpose served to illustrate simply that, "Hey! I'm wasting NBC airtime here!" He eschewed the typical talk show uniform of a tailored suit in favor of a tie, a blazer, khakis...and white Adidas wrestling shoes.

He dropped random things off roofs, blew random things up on the air, staged impromptu audience competitions (in addition to showcasing Stupid Pet, and Human, Tricks), used "viewer mail" segments as an excuse to break out various non sequitur-style sketches, did stunts in a variety of ridiculous suits (made of velcro, tortilla chips, etc.), and essentially offered a biting parody of the Hollywood machine from the perspective of a Midwestern "everyman" who somehow found himself trapped inside the establishment at the height of its decadence.

As a side-effect, Letterman was sort of feared in the business when it came to interacting with the guests. He was intimidating, and could be somewhat mean to them. Until the late 1990s when he started to mellow down, it was fairly well-known that his only real friend in the business was Julia Roberts. In one interview in the early 2000s, Roberts mentioned the fact that Letterman had softened up and that now every actress was a "lovely girl". Letterman's quip was "Oh, you know I'm just woofing."

Ironically, Letterman's influential "anti-talk show" sensibility ended up saving the talk show format as we know it at some point towards the end of Carson's stint as host of The Tonight Show. Without Letterman mocking the genre in the 1980s, today's genre staples (especially Conan O'Brien's shows) would likely not exist in their current form.

Not to be confused with The Lettermen or Letterman. 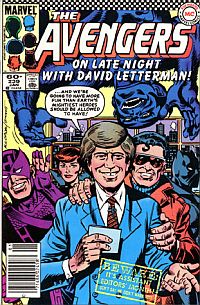 Retrieved from "https://allthetropes.org/w/index.php?title=David_Letterman&oldid=1689935"
Categories:
Cookies help us deliver our services. By using our services, you agree to our use of cookies.