Everything About Fiction You Never Wanted to Know.
Jump to navigation Jump to search
/wiki/Christopher Walkencreator 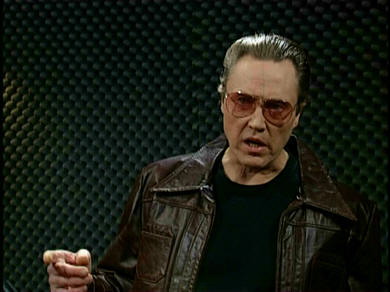 I've got a fever, and the only prescription is more cowbell!

Christopher Walken (born March 31, 1943) is an Academy Award winning American actor of stage and screen, in a career spanning more than 50 years. A prolific actor, he has appeared in over 100 movie and television roles, notably including A View to a Kill, At Close Range, The Deer Hunter, David Cronenberg's The Dead Zone, King of New York, Batman Returns, True Romance, Catch Me If You Can and Pulp Fiction, as well as music videos by recording artists such as Madonna and Fatboy Slim.

Walken appeared as the Archangel Gabriel in the first three Prophecy movies, as well as his frequent guest-host appearances on Saturday Night Live (seven in all, though six of them [the ones from 1990 to 2003] have his recurring sketch "The Continental" and all six of them have monologues in which Walken sings and dances; the one from the Writers Strike-shortened 33rd season has neither of these), his most notable being The Bruce Dickinson in the "More Cowbell" sketch and Casanova Wannabe The Continental (based on an actual TV character from an obscure 1950s show; but most people wouldn't know that). In the United States, films featuring Walken have grossed over $1.8 billion. He has also played the main role in the Shakespeare plays Hamlet, Macbeth, Romeo and Juliet, and even Coriolanus. Famous film roles were Nikanor "Nick" Chevotarevich in The Deer Hunter (for which he won the Academy Award for Best Supporting Actor) and in Pulp Fiction, as Captain Koons, a Vietnam War veteran, which has since become a pop culture icon, despite his appearance being less than five minutes in length (many of his roles probably count for being "best thing in the movie"). In fact, his prolific film appearances relate to his own policy of never turning down film roles unless he's too busy, finding that each and every role is a learning experience. One can only wonder what he learned from Gigli...

His distinctive style of speaking, including random pauses, wild enunciation and a tendency to change voice pitch at random, have made clips from his movies subject to a great deal of Memetic Mutation, and he's probably the third most-imitated actor out there, after Connery and Ahnold. ("Diz gai... is un-FUCKING-believable!") He doesn't actually sound much like most of his impersonators. You're still...imagining!...this article...in his illustrious voice! [1]

As pointed out by the top quote, Christopher Walken doesn't cherrypick with the roles he takes. He just plain loves making movies.

A former professional dancer, which he got to show off in the 2007 rendition of Hairspray, as well as the aforementioned Fatboy Slim video, which consists solely of him dancing in an empty hotel.

The Rule of Walken: It needs more cowbell. No exceptions.