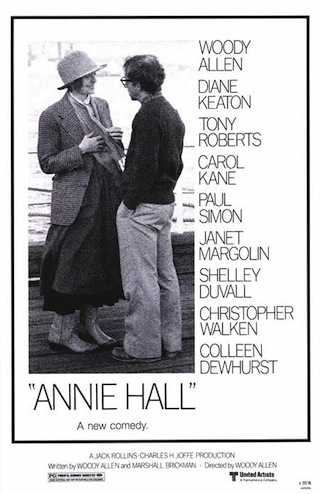 Annie Hall is a 1977 American romantic comedy film directed by Woody Allen from a script co-written with Marshall Brickman. One of Allen's most popular films, it won numerous awards at the time of its release, including four Academy Awards, and in 2002 Roger Ebert referred to it as "just about everyone's favorite Woody Allen movie".

Allen had previously been known as a maker of zany comedies; the director has described Annie Hall as "a major turning point", as it brought a new level of seriousness to his work, in addition to consolidating his signature cinematic style, which includes long, realistically written scenes of conversation, often shot in uninterrupted takes, and an equal thematic investment in both hilarity and heartbreak.

Tropes used in Annie Hall include:
Retrieved from "https://allthetropes.org/w/index.php?title=Annie_Hall&oldid=1912522"
Categories:
Cookies help us deliver our services. By using our services, you agree to our use of cookies.