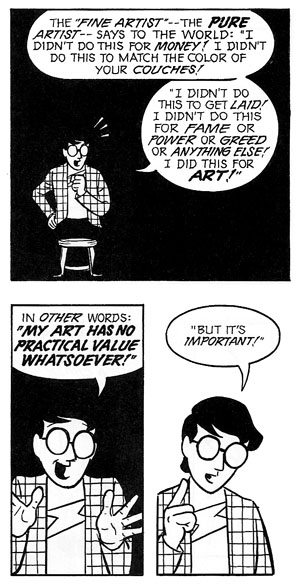 When dealing with media, sometimes it is difficult to overcome the feeling that, however much you may love a TV show, the only reason it exists is to make money. Sure, it might have great writing, acting, animation, but when it comes right down to it, it got produced because someone wearing a fancy suit thought a bunch of other guys wearing fancy suits could make money off of it. This feeling is even more overbearing when you consider all the TV shows you don't like - and likewise can only come up with the profit margin being the reason why anyone produced those horrible things.

But sometimes, there are shows which transcend the profit motive. It's not necessarily the case that they're good shows, but someone obviously cared a lot about it and put their absolute all in. There are details which, frankly, make no sense for the genre formula. Why bother having a Superhero show that has accurate Nazi war equipment? Why write a book set in a fantasy universe, but then include accurate fashion descriptions from the medieval period anyway? Why include hours of speech in made-up languages? Why, when you know simply from the brand name alone a product is going to make massive moolah, bother working at all, why not just phone it in and take a long nap?

The answer to this is simple. Not all of us need money to justify effort. A lot of people are honestly just Doing It for the Art.

This Trope spreads across all genres of known media - its main hallmarks are when the creator of a work is clearly putting far more effort into the project than necessary. Indeed, sometimes the amount of work being put in is a little creepy. Sure, it's a great vision and all, but does anybody need that much detail? It should be noted that this Trope only really makes sense when applied to pop culture. The definition of this Trope is that a work is better than one could reasonably expect, whereas one expects commitment and seriousness from culture such as literary fiction or art cinema, defined by being done for its own sweet sake, that is never expected or intended to make money. Saying Joyce went to more trouble than he needed to in the composition of Ulysses, for example, is missing the point of that kind of endeavor.

This Trope often applies to niche media, since oftentimes with more popular works the creators must work with the general expectation that they need to create something better than sliced bread. Yet it also crops up more obviously in media where we generally have a set of diminished expectations - want to know why the Western Animation section is so huge? Because the Animation Age Ghetto makes the really good ones stand out more.

But be aware, having this trope in play is not necessarily a good thing. Doing It for the Art does not equal quality work; if it did, then this article would have been put in the Sugar Wiki a long time ago. Some examples here are of people who genuinely tried, but were just not talented enough; knowing how much effort they put into their works does nothing to vindicate the final product. Conversely, doing it for money does not equal lack of quality; A Christmas Carol, one of the greatest stories in literature, was just something Dickens threw together for some easy cash. It's not the only one. Indeed, some writers' hackwork is preferred to what they regarded as important stuff, sometimes because doing it for money was the only way they let down their pretensions. Also, if somebody lets their success get to their head to the point where their "vision" hurts the quality of their work, it can quickly slide into a Protection From Editors situation. However, the romantic ideal represented by this Trope can lead to a backlash against creators who are perceived to be doing something solely (or even partially) for reward, possibly by people who assume that doing something for money means you don't put your effort into it for artistic reasons as well.

In Film analysis, someone who does a lot of this is called an auteur, as opposed to the metteur en scene, who is the journeyman director who makes someone else's movie. Within the artists' circle, this practice is called "Art for art's sake". Of course if it does actually make money, well that's just a perk.

The same motive appears in a far less benign (and more explosive) form in For Science!.

Contrast with They Just Didn't Care and Pandering to the Base.

Contrast and compare with Money, Dear Boy, Awesome, Dear Boy, and So My Kids Can Watch.

Examples of Doing It for the Art include:

Examples from characters in fiction

Retrieved from "https://allthetropes.org/w/index.php?title=Doing_It_for_the_Art&oldid=1955088"
Categories:
Cookies help us deliver our services. By using our services, you agree to our use of cookies.