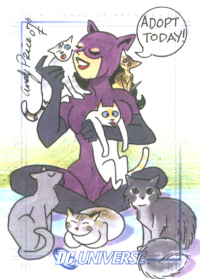 The more benevolent version of Crazy Cat Lady and Right-Hand-Cat.

It has commonly been said that dog is man's best friend, but there are many people out there who prefer company of a more feline variety. Unlike the above mentioned evil and crazy versions of the cat loving tropes, these characters have an honest affection for cats and are usually decent individuals themselves.

The range of love for cats these character runs a wide spectrum. Some people simply have a cat as their best friend or just adore them for their inherent cute factor. Other characters have a strong affinity toward them and will even go as far as to adopt some of their mannerisms or have felines flock to their location.

Characters who follow this trope aren't necessarily good guys, but the kind gestures they make is a way of showing that they aren't all bad - in other words, a scene where they're petting a cat is an example of Pet the Dog. This one crops up in Anime a lot due to the way cats are perceived in Japan, as opposed to much of the Western world.

Examples of Kindhearted Cat Lover include:

Retrieved from "https://allthetropes.org/w/index.php?title=Kindhearted_Cat_Lover&oldid=1948541"
Categories:
Cookies help us deliver our services. By using our services, you agree to our use of cookies.