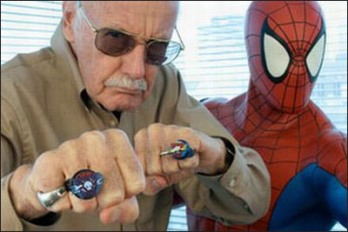 He was awesome for a long time, True Believers.

"Anyway, I'm not a cliché,
I hardly own any ties.
I may be old but at least I'm not
like all those other old guys."

—Five Iron Frenzy, "At Least I'm Not Like All Those Other Old Guys"

The effectiveness of a cast member is often determined by his distance from the median age of the cast. Deviations up or down will always be coupled with a lack of effectiveness. The Cool Old Guy is an exception to this. At some point, if one character is much older he swings the meter back to 'totally awesome'. In a lot of anime and video games, this makes him somewhere around middle age and the only non-clean shaven guy. Expect him to be greying, a loud voice, but in peak physical condition and unafraid of anything. For reasons that should be clear enough, this trope frequently overlaps with Bald of Awesome.

He usually won't have any special powers but that's only to marginally keep him from intruding on the other's limelight. He usually either has a dated and dramatic but lovable personality or is a complete no-nonsense hardass, depending on how the other characters act.

In Japan, this trope is called the Oyaji, written 親父 or オヤジ, which means "daddy". Can often stray into Even the Guys Want Him or Stupid Sexy Flanders territory. Wise Beyond Their Years is a younger version (usually no younger than late 20s at minimum) that has many of the same characteristics.

Examples of Cool Old Guy include:

Jet: Wait a minute! First of all, I'm not old enough to be your father, all right? Why, if anything, I would be your boyfriend...[1] No, wait, that would be bad, wouldn't it? Open foot, insert mouth. I mean, I'd be more like your older brother...

"I couldn't do the running. I was eighty! I said to George Lucas, I can do the swordfighting, but I can't run!"

Jetfire: My father was a wheel! The first wheel! Do you know what he transformed into?
Sam: ...no?
Jetfire: NOTHING! But he did it with DIGNITY!

Montgomery: Say hi to him for me. And tell him I could really use a raise. I think we're done here.
(Blake Wellsley leaves)
Castle: That was awesome!!

NASA Scientist: ...and Buzz Aldrin, the second man on the moon!
Aldrin: Second comes right after first!
(Long pause as everyone save Aldrin looks around awkwardly)