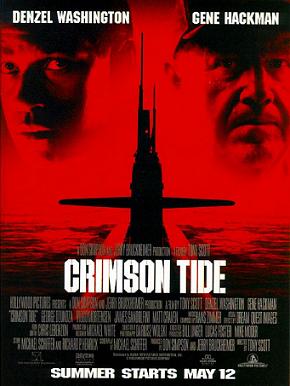 Crimson Tide is a war film about the United States Navy's nuclear submarine USS Alabama (SSBN-731), which gets sent to the Russian Far East to deter the leader of a Russian civil war, a violent nationalist who may or may not have nuclear weapons to use against the United States.

The main conflict occurs between the boat's executive officer, Ron Hunter (Denzel Washington), and The Captain, Frank Ramsey (Gene Hackman). Their personalities openly clash, Hunter being the modern Cultured Warrior and Ramsey having similarities to the old-fashioned Sergeant Rock. When their orders are Lost in Transmission, Hunter argues that they should not launch their nuclear weapons until they can confirm the orders. Ramsey fears that would be too risky.

Note on the title: "Crimson Tide" is the nickname for the sports teams at the University of Alabama.

Tropes used in Crimson Tide include:

Ramsey: God help you if you're wrong.
Hunter: If I'm wrong, then we're at war. God help us all.

Weaps: If they order him to launch, we'll launch, and we'll blow 'em all to hell. But I'd rather go down myself than get this one wrong.

Ramsey: May I have your attention, please. Mr. Hunter has brought it to my attention that morale may be a bit low, that you may be a bit... 'on edge'. So I suggest this: Any crewmember who feels he can't handle the situation can leave the ship right now. Gentlemen, we're at Defcon 3. War is imminent! This is the captain. That is all.
Hunter: Very inspiring, sir.