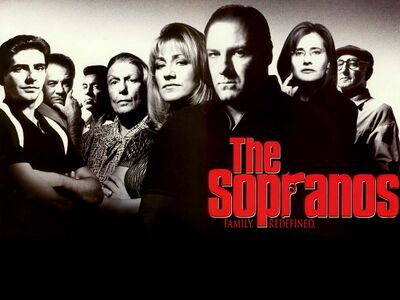 The Sopranos is centered around New Jersey Mob Boss Tony Soprano, who after a panic attack secretly begins seeing a therapist. Hilarity Ensues as his therapy coincides with him sending his troublesome, sociopathic mother Livia into a nursing home when it becomes apparent that she's no longer able to take care of herself.

The show focuses on Tony's dual families: his biological family -- long-suffering wife Carmela, his straight-A student daughter Meadow, underachiever son AJ, and his equally morally bankrupt sister Janice -- and the organized crime family he is involved in, who include his bitter uncle Junior, his 'nephew' (actually his wife's cousin) Christopher, and more.

The series ultimately ended with one of the most infamous cases of No Ending ever to air on an American TV show. See the WMG page for various interpretations.

Now has a Character Sheet under construction. Due to the Loads and Loads of Characters any and all contributions would be greatly appreciated.

Tropes used in The Sopranos include:

Tony is appalled when he learns to What extent his father disregarded the family 's interests and silently Vows to never be like him. Carmine is hinted to have similar views on marriage as Johnny Sack and Bobby.

Cleaver is a Show Within a Show movie written and produced by Christopher Moltesanti in season 6, but who has been working on and off on the project since season 1. It is about Michael, a Mafia hitman who gets set up and killed by his associates. This is done at the instigation of Michael's boss Salvatore, who is lusting after Michael’s fiancé. Michael is then resurrected as the eponymous "Cleaver", an undead zombie who kills off all his former enemies one by one, including his boss and former fiancé.

Retrieved from "https://allthetropes.org/w/index.php?title=The_Sopranos&oldid=1942917"
Categories:
Cookies help us deliver our services. By using our services, you agree to our use of cookies.