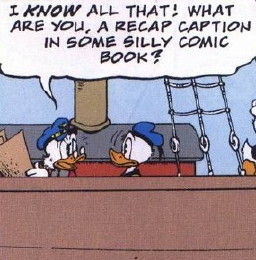 A form of Exposition where one character explains to another something that they both know, but the audience doesn't. It has been described as a "pernicious form of Info Dump through dialogue".

In discussions of science fiction this is often "As You Know, Bob" (abbreviated AYKB), or occasionally, "Tell me, Professor [about this marvelous invention we all use every day and have no reason to be talking about except to inform the audience]". Other common variations involve a newspaper reporter sent to cover events, or conversation between two supporting characters—hence another name, "maid and butler dialogue".

Terry Pratchett refers to the fantasy fiction version as the "As you know, your father, the king..." speech.

This is also a common feature of pilot episodes, where characters' backgrounds and relationships need to be established for the first time. Likewise, when new characters are introduced or the writers believe a reminder is in order, characters will explicitly refer to each other by name during a regular conversation, when this is rarely done in real life: "Say, Alice, how are you enjoying your coffee?" "Why, it's delicious, Bob, thanks for asking. How are you coming along, Carol?"

This is also quite common on medical drama shows like ER, Scrubs, and Grey's Anatomy, where common medical phenomena and simple procedures must be explained to the unfamiliar audience. In most cases, this is achieved by explaining the disease or procedure to an intern or non-professional character.

On some shows, characters will "As You Know" in order to provide information that was already provided in a previous episode (that viewers might have missed) or even earlier in the show (for those who just tuned in), to the great annoyance of dedicated fans. (e.g. Just Tuned In: "Remember, Bob, you only have 20 minutes to defuse the bomb..." or Previous Episode: "Jane is really mad at you for running over her dog last week, isn't she?") Soap operas or adventure-type shows will often circumvent this with a "When we last left our heroes" recap at the beginning of each two-parter.

Solitary characters prefer to use "Here I am..." instead.

Although writers try to avoid this by using The Watson (since not explaining anything sometimes results in the audience being too busy trying to figure out what's going on to enjoy the show), using this trope is not always a bad thing. Also, the most common alternative is to give the protagonist amnesia so he doesn't know, which isn't really considered a better option. The Idiot Hero and Fish Out of Water are also acceptable tropes to employ to make this trope more believable.

Was ridiculously common in post-World War II literature, to the point that readers expected it and could become confused if the writer left it out. This might be the most universal trope found in postwar literature; you find it in works by everyone from George Orwell to Barbara Cartland to Rex Stout. (One wonders which one of the three would be most insulted by that grouping.)

Examples of As You Know include: