Everything About Fiction You Never Wanted to Know.
Jump to navigation Jump to search
/wiki/Jack Kirbycreator 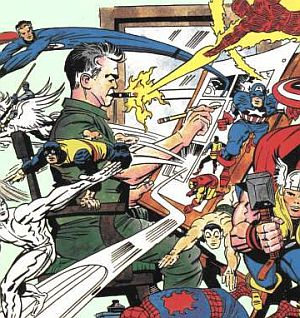 It's good to be The King.

Influential comic artist and writer who created or co-created dozens of classic characters for DC and Marvel. Kirby Dots are named after the artist's distinctive rendering of Battle Auras, also nicknamed, "the Kirby Krackle". His incredibly unique art style and bombastic storytelling made him one of the most imitated creators in western comics history. He died of heart failure in 1994 at the age of 76, or at least that's what Galactus wants us to believe. Also known as Jack "the King" Kirby.

In the Marvel Universe, God looks like Jack Kirby. Or, he did in one story. It should be noted that both Kirby and his comic book partner Stan Lee also exist there as normal people who write comics based on the 'actual' adventures of the superheroes.) Before working with Lee, he had a ridiculously successful partnership with Joe Simon. Among other things, the two co-created Captain America (comics) and the entire genre of romance comics.

After Kirby left Marvel, he went to DC Comics and created "The Fourth World" series, New Gods, The Forever People and Mister Miracle as well as insisting on taking over Superman's Pal, Jimmy Olsen which didn't have an assigned art team so he wouldn't cause anyone to lose their job. In those titles, Kirby created a grand cosmic mythos he planned to have reprinted into bound volumes for resale. Unfortunately, this idea was around 15 years ahead of its time and DC's publisher, Carmine Infantino, pulled the plug before Kirby could see the project through.

After that, Kirby's career went into decline with individual titles and even returning to Marvel for a time to return to Captain America and new titles like The Eternals before largely retiring from comics.

Ironically, his most satisfying work at this point was in animation and toys with designs for Thundarr the Barbarian and creating the designs for Kenner's famous Super Powers toy series where he finally got direct compensation working on the classic DC Comics characters.

Jack Kirby, unfortunately, was also a poster boy for how artists were treated by the companies who became multibillion dollar industries because of them. The dubious "work for hire" contract policies in those days meant that artists were paid for no more than the "page rate" for the comics that they drew. Consequently, despite their characters becoming iconic, Kirby and the other artists of his generation made absolutely no royalties of any kind and were denied any chance to share in the successes of their creations. Also, he was the center of the art controversy during the mid 1980s when Marvel's image was tarnished by their shameful claim that he and the other artists had no rights to their own original artwork. The Kirby estate is currently trying to regain Kirby's share of the copyright on his Marvel Comics characters, but whether or not their efforts would bear fruit remains to be seen.

No relation to this Kirby.

Partial list of his creations/co-creations:
Jack Kirby provides examples of the following tropes:
Retrieved from "https://allthetropes.org/w/index.php?title=Jack_Kirby&oldid=1660163"
Categories:
Cookies help us deliver our services. By using our services, you agree to our use of cookies.