Everything About Fiction You Never Wanted to Know.
Jump to navigation Jump to search
/wiki/Dan Abnettcreator 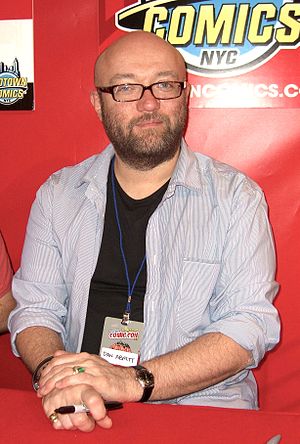 Dan Abnett is the writer of many acclaimed Warhammer 40,000 tie-in novels, including such series as Gaunt's Ghosts and its spinoff Double Eagle, Eisenhorn, and Ravenor, as well as Horus Rising, Legion and Prospero Burns in the Horus Heresy series and the standalone Brothers of the Snake. He's widely considered the best author of the franchise, and even those who snub 40k fiction will usually add "...except Dan Abnett." He was even appointed to write the story for the Ultramarines movie.

Abnett and his writing partner, Andy Lanning (Fan Nickname: D'n'A), have written many comics together, including a well-regarded run on an incarnation of the Legion of Super-Heroes. They wrote the fourth Nova and the second Guardians Of The Galaxy series and several Space Crossovers for Marvel Comics, including Annihilation Conquest, War of Kings and The Thanos Imperative, as well as The Authority for Wildstorm. In Britain, he has contributed extensively to 2000 AD, including a large number of Judge Dredd stories, and is the creator and primary writer of Sinister Dexter and Kingdom. He's also written alone for X-Men, and published a number of unrelated novels, including the recent Steampunk/modern fantasy novel Triumff - Her Majesty's Hero and the military sci-fi novel Embedded.

Abnett has also written several comics, books, and audio plays in the Doctor Who Expanded Universe (both Doctor Who and Torchwood), including the bridging part of the multi-author book The Story of Martha (set during "the year that never was" between "The Sound of Drums" and "Last of the Time Lords"), as well as a Primeval tie-in novel.

Works written by Dan Abnett include:

Works by Dan Abnett that have a separate page on the wiki:

Retrieved from "https://allthetropes.org/w/index.php?title=Dan_Abnett&oldid=1685394"
Categories:
Cookies help us deliver our services. By using our services, you agree to our use of cookies.