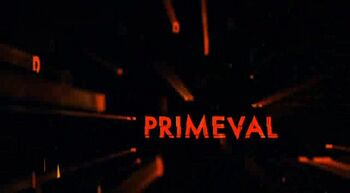 Primeval (2007-2011) is ITV's answer to the revived Doctor Who,[1] with less traveling through the cosmos, but more death (of recurring characters, anyway) and more underwear.

Primeval involves a group of crack scientists and experts (well... a paleontology professor, his TA, one of his students, an ex-zookeeper, an SAS guy, and a couple of Home Office boffins) protecting modern Britain from trans-temporal threats. These mostly consist of extinct, usually prehistoric, beasties trolling around the South of England after coming through time anomalies.

Actual dinosaurs didn't appear till series two (despite the show being often described as Who spinoff Torchwood with dinosaurs instead of sex); most of the creatures which appeared in series one are more ancient than dinosaurs. The exceptions were some parasite-infested dodos (assuming you don't count birds as dinosaurs) and a couple of futuristic predators.

A Canadian spinoff, Primeval New World, is in production.[when?]

Spoiler Warning: The vast majority of the spoiler tags on this page relate to the finale of Season 3. If you are watching the series and have not got to this point yet, you do not want to highlight these. You Have Been Warned.

Tropes used in Primeval include:
Retrieved from "https://allthetropes.org/w/index.php?title=Primeval&oldid=1831872"
Categories:
Cookies help us deliver our services. By using our services, you agree to our use of cookies.