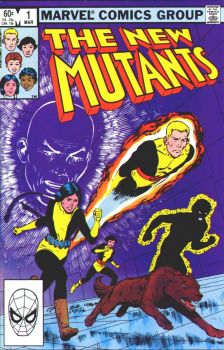 The New Mutants are three series featuring an eponymous group of teenaged mutant superheroes-in-training. The three series, two of which are now defunct, are spin-offs of the popular X-Men franchise published by Marvel Comics.

The first team of "New Mutants" was created by Chris Claremont (long-time writer of Uncanny X-Men) and artist Bob McLeod; they first appeared in 1982's Marvel Graphic Novel #4 and were subsequently featured in their own title from 1983 until 1991. Initially consisting of invulnerable flier Cannonball, fear-inducing Mirage (usually just called "Dani"), werewolf Wolfsbane, mind-possessing Karma (a character from a Claremont-written "Marvel Team-Up" story) and super-strong Sunspot, it was unusual in that the heroes were not only very young (around thirteen or fourteen years old), but absolute amateurs who could barely use their powers (Dani's Fear-powers often manifested without her desire, and Cannonball could barely control his flight). The book highlighted interperson and group conflict, as well as action and adventure, and featured a large ensemble cast.

Various plotlines include the team opposing Dani's fearsome foe The Demon Bear, a trip to Nova Roma -- an offshoot of the last of the Roman Republicans in Brazil (where they picked up new member Magma and new enemy Selene, the life-stealing immortal sorceress), Colossus' younger sister-turned-demon-sorceress Magik, a team-up with Doug Ramsey aka Cypher (a language-translating mutant), a rivalry with The Hellions (a Rival School formed by X-adversary The White Queen), and a meeting with Warlock (a shape-changing techno-organic alien running from his evil father, The Magus, a creature capable of destroying stars in his rage), Karma's disappearance (and takeover by The Shadow King), and Magneto taking over as Headmaster of the school from Professor X. By issue #50, the team defeated The Magus, and Chris Claremont soon left, and Louise Simonson took over.

Doug Ramsey was killed, four new team members were added (Rictor, Boom-Boom, Rusty & Skids, from Simonson's own "X-Terminators" team), and things soon fell apart for the team. The fabled (and notorious) Rob Liefeld shot some new energy into the book, and a horde of new characters started showing up, as Liefeld's creative energies (there was nothing else like him at the time- his extreme linework, flashy cyborgs and armoured characters were very unique in the era before the Iron Age Of Comics) would quickly overwhelm the pages. A new cyborg character named Cable showed up -- preaching a more militaristic and extreme approach to heroics, Moonstar left for Asgard, Rusty & Skids were brainwashed by the new villain team (The Mutant Liberation Front), and the team soon fell into the X-Tinction Agenda, which resulted in the loss of Warlock (to Cameron Hodge's energy-drain) and Wolfsbane (who became a mutate and left to join the new X-Factor).

Eventually, Louise Simonson was replaced by Fabian Nicieza as head writer, and the book was transformed into X-Force, renewing the gutted team with Liefeld creations Domino (a gun-toting former ally of Cable), Shatterstar (a dual double-bladed sword-wielding arena gladiator from Mojoworld), Warpath (former Hellion member Thunderbird) and Feral (an Expy of Wolfsbane. Various teams and backstories were introduced, as they brawled with Liefeld's never-ending cavalcade of new character designs (the MLF, Weapon: P.R.I.M.E., The Externals). Liefeld would leave a year later (in the Image Exodus), and Nicieza would take the helm, forming a much more stable book, though still firmly a 1990s-style book. It ran for over one-hundred issues, before quietly disappearing. 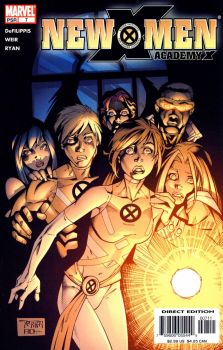 The second New Mutants series, launched in 2003 and written by Nunzio De Filippis and Christina Weir, featured another group of teenaged mutants - air-controlling Wind Dancer, skill-copying Prodigy, super-fast energetic Surge, healer Elixir, emotion-controlling Wallflower, and flying Icarus - but unlike the original New Mutants, they were only part of a huge cast of students at the Xavier Institute. At first they were notable for their drive to become superheroes, but soon rival groups played a large role in the series. Main cast of original New Mutants had become teachers at Xavier's Institute and has problems coming in terms with the fact they are now „old guard” for the new generation.

In 2004 it was relaunched as New X-Men: Academy X, after which the central group was formally dubbed "The New Mutants". They quickly found rivals in team supervised by Emma Frost – new Hellions – that considered arrogant telekinetic Hellion, made-of rocks Dumb Muscle Rockslide, capable of turning her body into sand Dust, bestowed with decaying touch Wither, fear-inspiring Tag and Mercury, whose body was made from metal similar to mercury, she could manipulate at will.

Series focused strongly on character's relationships and personal issues instead of supervillain battles which was a downfall for some but a strength for others, who appreciated good characterization and an optimistic feel. 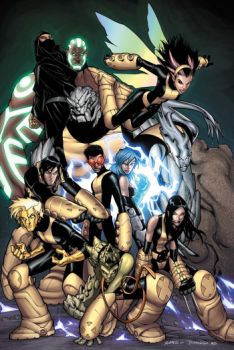 In 2005 the series was taken over by X-Men Evolution writers Craig Kyle and Christopher Yost who introduced it to new, Darker and Edgier, status quo. In the wake of House of M event most of mutants on Earth has lost their powers, including several students at Academy X, from which lots has quickly suffered C-List Fodder-style deaths. All of the training squads were disbanded and the students with the most offensive capabilities – Helion, Surge, Dust, Mercury, Rockslide, Elixir and Canon Immigrant X-23 were formed into New X-Men team, whose purpose was protecting students in case adult X-Men failed to do so. Later the reptilian Anole, flying illusionist Pixie, super-strong Gentle, and depowered Prodigy, who still retained all his copied knowledge and skills, were added to the team.

Despite being strongly criticized for much Darker and Edgier approach than previous writing team, Kyle and Yost managed to provide a lot of consistent stories, exploring character's lives, relationships and how they cope with the fact that they may be not only the youngest generation of mutants, but the last. 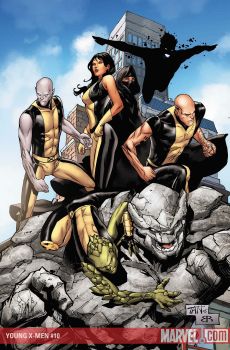 After Messiah Complex event, New X-Men was canceled and replaced with new series, Young X-Men, written by Marc Guggehneim and being Spiritual Successor to all previous incarnations, introducing a team roster featuring both Dani Moonstar and Sunspot from New Mutants and Dust, Rockslide and Anole from New X-Men, as well as young mutants from other titles – Blindfold and Wolf Cub (the former originally was supporting character in Joss Whedon's Astonishing X-Men and latter in Chuck Austen's Uncanny X-Men. Both were also hanging around in New X-Men but never officially joined them) and new characters – Ink, Graymalkin and Cipher.

The story starts with Donald Pierce impersonating Cyclops and gathering mutants left after the X-Men disbanded, convincing them that the original New Mutants have all pulled out Face Heel Turn and sending new team to kill them. After his cover was blown off, the real Cyclops accepted the team and Dani and Sunspot joined them as supervisors.

The series wasn't well-received and was canceled after twelve issues. A third X-Force series tried a few times to boost Young X-Men's popularity with use of Cameos and mentioning its plot points, incorporating the later unresolved Donald Pierce plot-line. Guggenheim has said that he isn't fond of the direction he took the team and today would do it differently, if he had a chance. 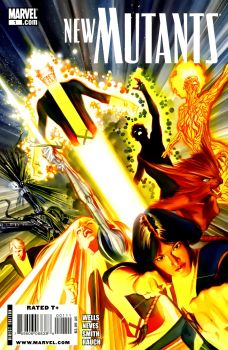 Old school is back to kick some butts

The third New Mutants series written by Zeb Wells, reuniting most of the original team, launched in May of 2009. This new series incorporated few elements from both New X-Men and limited series X-Infernus via the return of Illiyana and the New Mutants being reassigned to help her blend back into mutant community, which may be problematic, considering that, after their last two encounters, the youngest generation of X-Men hates her guts. The team roster has quickly expanded with addition of Warlock and return of Doug. After his defeat at their hand, Legion has become their supporting character and unofficial member of the team. The series has been focusing on a larger Myth Arc about upcoming threat from Limbo, with occasional tie-ins to various X-overs and one guest-written tie in to Siege.

After Wells' departure, this series was taken first by Mike Carey, as a part of his Age Of X storyline, during which he introduced alternate reality with much darker history which was later revealed to be Lotus Eater Machine all present mutants has been dragged into by one of Legion's personalities, and later by Dan Abnett and Andy Lanning. In face of all their accomplishments Cyclops decided to not disband the team (despite that three members has to leave Karma lost a leg, Cannonball has been traumatized by events from Wells and Carey's runs and Magik has to be restrained after she manipulated her friends and almost got them killed for personal vendetta) and to make their new mission taking care of all loose ends that remain unresolved after each new threat the X-Men face and making sure they won't come to haunt them again (in other words, he made them a non-lethal version of third X-Force).

The 2000-3 animated TV series X-Men: Evolution included a group called the New Mutants, with a membership made up of members from several different eras of the comic book team, as well as few who had never been part of team in the comics.

The 2014 film X-Men: Days of Future Past featured several of the New Mutants -- Blink, Warpath and Sunspot -- in supporting roles.

A Live Action Adaptation of the comic book, The New Mutants was scheduled to hit theaters in April 2020 before the theatres were closed in March 2020 - the movie's release is on hold during the COVID-19 pandemic. It appears to be titled strongly toward a Horror feel rather than a traditional superhero film.

Tropes used in New Mutants include:
Retrieved from "https://allthetropes.org/w/index.php?title=New_Mutants&oldid=1773489"
Categories: