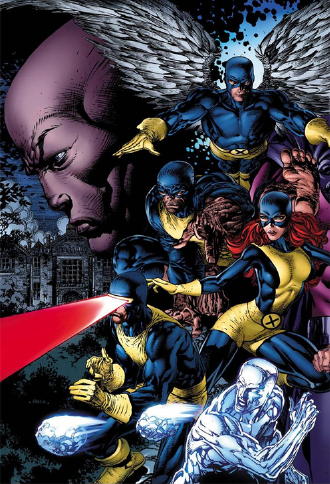 The X-Men are a superhero team in the Marvel Universe. They were created by writer Stan Lee and artist Jack Kirby, and first appeared in The X-Men #1 (September 1963).

Under a cloud of increasing anti-mutant sentiment, Professor Xavier creates a haven at his Westchester mansion to train young mutants to use their powers for the benefit of humanity, as well as to prove mutants can be heroes. Xavier recruited Cyclops, Iceman, Angel, Beast and Jean Grey, calling them "X-Men" because they possessed X-tra power due to their possession of the "X-Gene", a gene which normal humans lack and which gives mutants their abilities. Though the X-Men started off with just five members, as the years went on, many characters joined the team. Just as many left, and some returned.

Early issues introduced the team's archenemy, Magneto and his Brotherhood of Mutants, who would battle the X-Men for years. Although the original team was composed entirely of WASPs, as was typical of the time, the All-New, All-Different team of 1975 was incredibly diverse (and for the most part averting Captain Ethnic), and subsequent team makeups have kept this aspect.

The X-Men comics have been adapted in other media, including animated television series, video games, and a successful series of films.

Due to a massive spike in popularity in the late 1980s, now covers a whole franchise of different titles. These are some of the various spin-offs to be found here on All The Tropes.

In 2011 an X-Event called "Schism" divided the X-Men in two teams: The Blue Team led by Cyclops and the Gold Team led by Wolverine. As a side effect of this separation, there are actually nine books in the X-Franchise: four for each group plus one neutral.

The three main titles are:

Secondary titles for the Gold Team are:

Secondary titles for the Blue Team are:

Ongoing X-Men titles not tied to either of the core teams:

Comic book titles linked to the X-men include:

...and too many more to name. Every major character has had at least one miniseries, usually several. See what The Other Wiki has to say about it.

In addition to the comic series, they have also been adapted to television:

And last but not least, our merry mutants have starred in a few video games:

X-Men (Comic Book) is the Trope Namer for:
The X-men comics contain examples of:

No fewer than four characters in the main continuity of the X-Men comics can be said to be the child of Scott Summers, only one of whom (Cable) was actually born during the timeline of the main Marvel Universe, and none of whom are more than about ten years younger than their parents (including Cable, who is, due to the massive amount of Time Travel in his backstory, at least ten years older than his parents).
Add to that Scott's brother Alex, their long-lost father (the space pirate Corsair), and the supervillain-ruler-of-a-galactic-empire Third Summers Brother (Vulcan), and the whole thing is just one big mess. Ironically, Scott started out as an orphan with no known family.

Retrieved from "https://allthetropes.org/w/index.php?title=X-Men_(Comic_Book)&oldid=1858266"
Categories:
Cookies help us deliver our services. By using our services, you agree to our use of cookies.