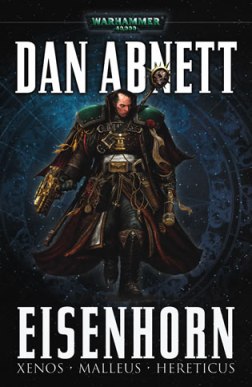 Eisenhorn is a trilogy of novels by Dan Abnett set in the Warhammer 40,000 universe, following the adventures of the titular Inquisitor and his retinue as they combat the enemies of the Imperium of Man. Throughout the books, Eisenhorn finds himself having to use increasingly desperate and dangerous means against his foes.

The first book, Xenos, starts with Gregor Eisenhorn and his crew pursuing a heretic in a seemingly routine task when they uncover a mysterious artifact bearing the preserved mind of the heretic Pontius Glaw. In the subsequent investigation, Eisenhorn and crew find themselves embroiled in a heretic group's plan to contact aliens for a demonic text.

The second book, Malleus, begins with a major celebratory parade ruined by Chaos-linked renegades. The pursuit of these enemies leads to Eisenhorn uncovering and defeating a much-revered Inquisitor gone to Chaos.

The third book, Hereticus, sees Eisenhorn pursued by allies of Glaw and his attempt to stop Glaw from acquiring a world-ending power.

There are also two short stories available, both of which can be found in the doorstopping omnibus edition. A spin-off trilogy, Ravenor, has been published and Dan Abnett has recently been talking about a third "Bequin trilogy", described by him as Eisenhorn vs. Ravenor. The first volume of new trilogy is titled "Pariah".

In the mean time, Eisenhorn is set to appear in a set of Audio Dramas, collectively called Talon and Thorn.

Tropes used in Eisenhorn include:

As part of Warhammer 40,000, the series involves a large number of the tropes on that page, as well as employing literary and narrative tropes of its own:

Eisenhorn: I was a psyker, she an Untouchable. That way pain and madness lay.