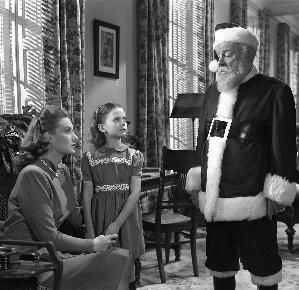 Faith is believing when common sense tells you not to.

The other famous heartwarming Christmas movie, after It's a Wonderful Life.

Revolves around an old man calling himself Kris Kringle who may or may not really be Santa Claus.

The original film version was released in 1947, and starred Edmund Gwenn as Kris Kringle, Maureen O'Hara as Doris Walker, Natalie Wood as her daughter Susan, and John Payne as lawyer Fred Galley. It was a box office success, won three Oscars (one for Gwenn, two for the writers), and is shown on television every year.

The story has been adapted several times for television and once for Broadway. There was a theatrically-released remake in 1994 written by John Hughes. Richard Attenborough was cast as Kris Kringle, Elizabeth Perkins as Dorey Walker, and Mara Wilson as Susan. The remake was a modest box office hit, earning $46,264,384 in the worldwide market. With $17,320,136 from the United States market alone, it was the 80th most successful film of its year.

The story involves an old man who gets hired to be the Mall Santa for a big New York City store. Thing is, he claims to be the actual Santa, and when customers ask, he tells them where to find the cheapest toys -- even if it means sending them to competing stores! However, this move endears the store to the customers (who think it was the management's idea) and actually boosts the store's sales. However the company's psychologist develops a grudge at "Kris Kringle" and tries to get him committed to an asylum, which leads to a big showy trial over whether he really is Santa Claus.

An important subplot revolves around Susan's lifelong disbelief in Santa Claus (due to her bitter divorced mother being against believing in fantasy) but meeting Kris causes her to start wondering. There's also a romantic subplot involving her mother, Doris, and Fred, who defends Kris in court.

While there is no apparent proof that Santa Claus is actually real in the movie, the ending leaves the audience wondering...

The original version of Miracle on 34th Street was added to the National Film Registry in 2004.

Tropes used in Miracle on 34th Street include:

The 1947 original provides examples of:

The 1994 remake provides examples of: