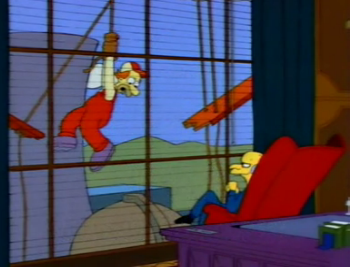 Now... comes the most entertaining part: the wait.

A senior manager, CEO or owner of a major definitely-for-profit corporation who is out to make as much money and gain as much power as possible, by any means available, regardless of who suffers. To that end, they are perfectly willing to violate business or social ethics, commit crimes (ranging from fraudulent accounting to mass murder), and devastate Mother Nature and human communities, justifying those actions under the name of "just business". They are confident that all they have to do is spread enough money around to get their way or avoid punishment, and are very likely to cross the Moral Event Horizon and/or become The Unfettered in their search for profit.

Expect to find them at the head of an enormous boardroom table on the top floor of an Evil Tower of Ominousness.

They usually fail to consider the full effects of their plan, or the fact that they can make more by going legit, and at times the plan seems to have no concrete way of creating wealth. Usually, they remain in business thanks to Offscreen Villain Dark Matter.

A well-known variation of the CCE is the CEO or President of a megacorporation that produces and controls everything (even the authorities) and is the de facto ruler of the world. This is one of the major villains in Cyberpunk.

Another variation of the CCE is the Robber Baron, a pre-80s, industrial revolution era manifestation that retains all of the CCE's cosmopolitan, far-reaching financial and political power, with perhaps even less governmental or media constraints to consider. Joseph Pulitzer, from the movie Newsies, is a perfect example of this subtrope. The Robber Baron will have a different wardrobe and jargon than the 80s CCE, as appropriate to his setting, but is otherwise indistinguishable.

Another variation on the CCE, found mostly in Walking the Earth series, is basically a Corrupt Hick, with a business. The "corporations" they represent are not major multinational conglomerates, but small businesses like trucking companies, hotels, or other "mom and pop" ventures that simply want their competitors out of action. They tend to have little power outside of a single town or county, but can usually amass a small army of redneckish goons and threaten violence with impunity by virtue of paying off local law enforcement and/or the judiciary. This flavor of Corrupt Corporate Executive favors harassing a competing store owned by a kindly old man/woman and/or their family.

This is one of the inevitable progressions that any ambitious character will end in. See Also There Are No Good Executives and Morally-Bankrupt Banker.

While this is certainly Truth in Television, No real life examples, please; Calling real-life people "evil" is an extremely bad idea.

Examples of Corrupt Corporate Executive include:

Retrieved from "https://allthetropes.org/w/index.php?title=Corrupt_Corporate_Executive&oldid=1935744"
Categories:
Cookies help us deliver our services. By using our services, you agree to our use of cookies.