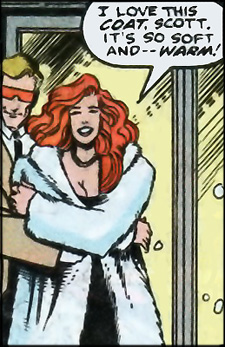 Jean Grey needed a new winter coat. She bought a fur, just because.[1]

Although fur historically was worn for warmth, it's also for centuries been associated with wealth and glamour. Thus some outfits have fur, just because it makes everything's more stylish, more grand, more sexy (since some folk like how soft fur feels, and how it looks wrapped around a woman, or a guy).

Fur worn for more than warmth alone has been around since perhaps as long as civilization. In Europe, it largely started in earnest when power shifted from Rome to Central and Northern Europe. This was around the time kings brought the Ermine Cape to the Ermine Cape Effect. That combined with Sumptuary Laws about who could wear what kind of fur made this quite the luxury, save for the least expensive, like sheepskin.

At one point furs were so common they didn't provide characterisation the way they do today under the Hollywood Dress Code. The exceptions were very specific outfits, like the classic pimp coat. What fur was worn was generally chosen one of two ways. The first was reflecting whatever trends was popular for a certain demographic. The second was whatever the designer felt like.

These days furs are less common and tend to show Conspicuous Consumption. The trope now has competition from Fur and Loathing, where a woman in a fur coat is evil—the Rich Bitch, The Vamp or worse. Other characters who wear fur tend to do it for a single special episode.

Now since this is about gratuitous use of fur, it's not just any instance of wearing fur. Even if a fur is worn for warmth, it also has to be an excuse to have a nice fur in the scene to count for this trope. Thus an Inuit parka usually doesn't count, unless the parka is dwelt upon lovingly and is designed to be stylish.

Examples of Pretty in Mink include:

Retrieved from "https://allthetropes.org/w/index.php?title=Pretty_in_Mink&oldid=1640828"
Categories:
Cookies help us deliver our services. By using our services, you agree to our use of cookies.