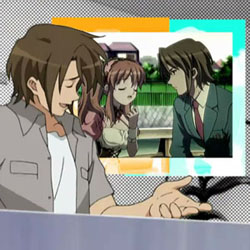 In a nutshell, the basic concept is to take footage from your favorite TV show, set the scenes to your favorite music, maybe add some Fan Art or fansubbing, put it all together in a digital movie maker on your PC, upload it to a video streaming site online, and wait for the comments to pour in.

It's not the most productive activity in the world, but for the most dedicated, it is one of the most time-consuming. Like Fan Fics and Fan Art, making and watching these videos is another way fans express their obsession over a show.

Naturally, the companies and network executives behind the shows and music are mixed on the whole deal. Some welcome the support and publicity and even hold competitions for the best video. Others simply turn a blind eye to the videos, neither encouraging them nor forcing them removed under threat of lawsuit. Other companies do that very thing.

By definition, Fan Vids consist entirely of copyrighted material. Whether the usage of the clips counts as Fair Use or not is up for debate, but there's a lack of legal precedent for whether it qualifies as fair use, largely because few makers of one are interested in dragging the case to court when they could just re-upload it under a different user name or on a different site. In any case, the proliferation of such videos makes it difficult for any company to gain headway in removing them.

Fan Vids made from Anime or cartoon sources are also called Animated or Anime Music Videos, or AMVs, while Japanese fans call theirs Music Anime Doujinshi, or MADs.

Fan Vid artists can also get into trouble for the audio they use. AnimeMusicVideos.org, which catalogs its namesake and hosts over 80,000, had to remove all videos using music by Evanescence in late 2005. Hosted videos now come with the disclaimer, "THIS VIDEO IS PURELY FAN-MADE AND IS IN NO WAY ASSOCIATED WITH THE MUSICAL ARTIST OR ANIME COMPANY IN ANY WAY." -- which provides absolutely no protection from copyright laws.

Shipping vids and vids centered around your one favorite character (sometimes called "tributes") seem to be the most prevalent, though Gag Dub parodies have been picking up steam recently.

Just like with Fanfic, Sturgeon's Law applies oh so very much when it comes to the overall quality of the videos.

A Sister Trope is The Abridged Series.

Grabbing a specific scene, mostly or totally unaltered and unedited, from a work of media, and adding it music from a foreign work, specifically inserted to better blend in, sometimes improving upon the original music placement. In this regard it differs entirely from your traditional AMVs.

This is not, of course, to say that all Fan Videos are like this—but an overwhelming majority of them are. Some have even resulted in Memetic Mutations.