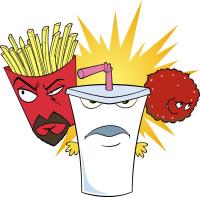 A weird original series from Williams Street Productions, Aqua Teen Hunger Force (2000-2015) covers the adventures (such as they are) of three amateur detectives/superheroes/bums living in New Jersey. The Aqua Teens first appeared as one-off characters in an (formerly) unaired episode of Space Ghost Coast to Coast (also a William Street production), but were eventually given their own show -- with changes to their appearances and personalities.

The eponymous "heroes" are Master Shake, a lazy, insulting, anthropomorphic milkshake who is the self-proclaimed leader of the Aqua Teen Hunger Force; Meatwad, a dim-but-lovable blob of raw meat who is frequently bamboozled, teased, and/or tortured by Master Shake; and Frylock, an intelligent box of french fries who is the extremely competent and halfway-morally-decent member of the force (except during his own moments of amoral behavior).

Their "adventures" are usually limited to making each other's lives hell or doing the same to their next-door neighbor (a fat, bald, slovenly Joe Average named Carl) by borrowing his stuff or swimming in his backyard pool without permission. The Aqua Teens occasionally have run-ins with bizarre monsters or aliens who turn out to be more obnoxious than they are evil. The best examples are two sets of recurring nuisances: The Mooninites (Ignignokt and Err) two aliens from the moon with an uncanny resemblance to sprites from an Atari 2600 game, an unshakable belief that they are superior to everyone else, and a predilection for tobacco, alcohol, petty larceny, and flipping people the bird; and the Plutonians (Emory and Oglethorpe), two spiny, cone-shaped aliens with designs on world domination and nowhere near enough competence or common sense to pull it off.

The show is notable for a heavy dose of Slapstick, surrealism, lots of Stuff Blowing Up, the Aqua Teens' television getting destroyed (at least) Once an Episode, and stream-of-silliness dialogue. ("Ever since my son was...never conceived because I never had consensual sex without money involved, I've looked at you as a... a thing I could live next door to, in accordance with state law. Now are we going to the Super Bowl or not?")

For the first two seasons, the show featured teasers starring Dr. Weird, a Mad Scientist living in an abandoned New Jersey insane asylum (along with his long-suffering assistant, Steve), who may or may not have had a hand in creating the Aqua Teens (fans have long speculated over the meaning of a picture, seen in Frylock's room on occasion, that shows Frylock with a much younger Dr. Weird). While the earliest episodes of the series showed Dr. Weird revealing his latest invention (only for it to escape and cause mayhem for the Aqua Teens), later teasers had nothing to do with the episode that followed. In the third season, the Dr. Weird clips were replaced with "Spacecataz", a failed pilot (split up into multiple parts) that followed the story of an escalating prank war between the Plutonians and the Mooninites. (The full, uncut pilot is an extra on one of the DVD sets for the show.) Episodes in the following seasons had no opening clips.

During the eighth season, the series changed its name to Aqua Unit Patrol Squad 1, and the producers said that the stated intention of the change was to reboot the series from the ground up and revisit the notion of the characters being detectives. As you might have expected, the show is virtually unchanged aside from the opening/closing sequence. The series was given another new title "Aqua Something You Know Whatever" in 2012, which has the group adopt a baby. The plan is to continue changing the name every year.

There is a golf game based on the series, in which you alternate between hitting the golf ball (or, occasionally, Meatwad) towards the hole, racing a golf cart against frat aliens, and killing a variety of frankly insane opponents (ranging from robotic turkeys to mummies) with everything from golf clubs to swords to chainsaws to an electric guitar.

Tropes used in Aqua Teen Hunger Force include:
Retrieved from "https://allthetropes.org/w/index.php?title=Aqua_Teen_Hunger_Force&oldid=1912449"
Categories:
Cookies help us deliver our services. By using our services, you agree to our use of cookies.