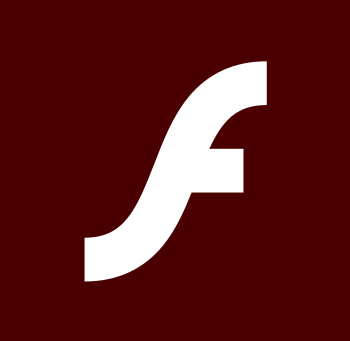 Adobe Flash was a vector graphics animation software program developed by Macromedia (based on an earlier program by Macromedia purchase FutureWave) and later added to Adobe's series of professional graphic applications under their merger. Initially called Shockwave Flash, it was designed to create smooth line-art animations and interactivity for web-based projects (basically, Illustrator, but with the 4th dimension added). It introduced its own coding language, Actionscript, and has its own standalone player software as well.

The "Shockwave" brand was something of an Artifact Title even from the beginning. See, Macromedia had an existing product called "Director" that was more mature and did some of the same things, and they had developed a browser plugin called "Shockwave" to let people view Director movies directly in their browser. After Macromedia bought FutureWave, they positioned Flash as something of a "Director Lite", most likely to protect Director sales. Flash proved popular, however, and eventually they dropped the Shockwave branding.

Since its introduction, Flash has gained more and more features. Due to the shortcuts that it offers that aren't available in normal animation, combined with steady improvement in computer performance and decreasing budgets from cable networks, it's started to branch from animations made for the Web into television and even movie animation (this article mainly covers these titles). Not everything made in it is good, but the standouts tend to be excellent. Also, Flash has been a key component in the rise of Web-based TV, owing to its installed base and features that make playback easy to implement.

Flash has not been without its competitors. Toon Boom has been competing against it in the entertainment industry for years now, and has actually been used in big-scale feature films. Both programs have developed to the point where it is nearly impossible to determine which show was made with which program just by watching them. Silverlight is a direct competitor to Flash on the Web, developed by Microsoft and based on .NET classes. Also, HTML 5 adds video capability to the HTML standard, though it's still new and isn't available in all browsers, much less the older versions people are likely to keep around for the next few years. Apple has a turbulent relationship with the software due to its rudimentary video performance- their iPad originally could not play Flash Player videos, and Flash games are nowhere to be found in the games that are available for their hardware.

Flash's player became commonly used by web designers for tasks it wasn't originally intended to perform well, such as banner ads, bitmapped video, games, complex interactive applications and, as of Flash 11, full on 3D rendered games. Its adoption for those uses can be traced to the Microsoft vs. Netscape wars of the late 1990s, which kept equivalent functionality from being standardized in HTML while the two sides duked it out. Now that the browser landscape has improved and most browsers at least try to follow the relevant standards, complex forms and applications using “AJAX” have gained in popularity; this also made them attractive for use on smartphones, which often didn't have the CPU power to run a full-featured Flash plugin.

In November 2011, Adobe announced it will no longer develop Flash software for iOS games past the current version; development for the Android version of Flash was also dropped around the same time. This more or less marked the beginning of the end of the software, and soon alternatives based in the new standard HTML5 began to be developed, with Adobe themselves beginning to phase out Flash in favor of their new technologies Adobe AIR (which was specifically aimed to game developing), and their newer software Adobe Edge Animate (which is basically Adobe Flash for HTML5, with the aim of making this technology more accessible to designers, artists and people without a technical background).

The Flash Player was deprecated in 2017, and officially discontinued on December 31, 2020 in almost every territory save China, with most browsers and operating systems disabling it shortly afterward (or, in some cases, beforehand). Some projects to emulate Flash with the purpose of keeping access to the enormous library of web content created with the software; the best known is the Ruffle emulator, which is used by the Internet Archive and other preservation projects.

Not to be confused with the brick-walled superhero of the same name.

See also Web Animation, Web Games and Thick Line Animation. If you're looking for a list of websites that require Flash in order to work at all, see Category:Flash Content.

Works that used Flash include:

Retrieved from "https://allthetropes.org/w/index.php?title=Adobe_Flash&oldid=1964943"
Categories:
Cookies help us deliver our services. By using our services, you agree to our use of cookies.