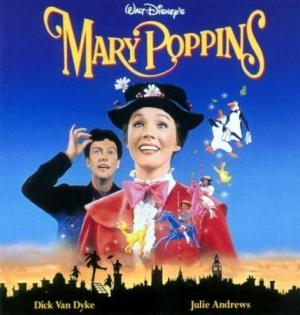 If that's too much of a mouthful for you, she's also a magical nanny, who literally flies into the life of the Banks family of London, England, circa 1910. The ensuing adventures were originally a series of children's books by P. L. Travers, and there's also a musical stage adaptation, but when most people hear the name they think of the 1964 film starring Julie Andrews as Mary Poppins and Dick Van Dyke as Bert. Which is not surprising, as it is a very good movie; unless you are P. L. Travers, it is in serious competition for claiming the title of finest live-action feature that Walt Disney ever produced. Timeless songs, a perfect cast (yes, even Bert with his infamous accent), special effects that still hold up 40+ years later, and Van Dyke dances with penguins. Show it to your kids. Watch it yourself. Try not to sniffle too much at the climax.

It has recently[when?] been adapted to a splendid musical theater adaptation now touring the United States; this version replaces some of the less stageable aspects of the original film (as in the penguins and Uncle Albert's floating) with elements of the original book by Travers, in an example of both Adaptation Expansion and Adaptation Distillation. Catch it if you can!

A Spoonful Of Tropes'll Help the Article Go Down:

Retrieved from "https://allthetropes.org/w/index.php?title=Mary_Poppins&oldid=1830472"
Categories:
Cookies help us deliver our services. By using our services, you agree to our use of cookies.