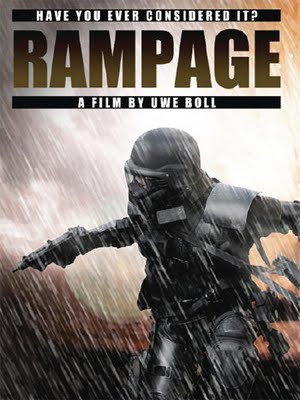 Rampage is a 2009 film directed by Uwe Boll. Despite its name and the fact that it's made by a director most famous for video game adaptations, it is unconnected to Midway's series. The plot concerns a young man named Bill Williamson (no, not that Bill Williamson) posting vlog rants about how the world is overpopulated and society's going down the drain, while building a suit of body armor and stocking up on weapons, leading up to a bloodthirsty rampage through his town. Amazingly, given the poor reputation of its director, it's actually a pretty good movie.

Not to be confused with the 1987 film of the same name. Or with the series of kaiju arcade games.

Tropes used in Rampage (film) include: