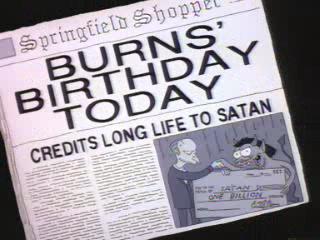 So, Burns, I take it the doctors who helped you after you got shot don't deserve any credit?

The Big Bad has kicked the hero's dog, abducted that Ridiculously Cute Critter's loving family only to torture them to death, blew up the castle of King Elden the Good with him and his subjects in it, abused the most sympathetic of his Woobie minions, killed off the series' most popular Ensemble Darkhorse, invented a Kill Sat that uses babies as its primary fuel, ate little kids as a morning snack and jaywalked in front of a bus full of nuns.

He's done just about every conceivable thing that would make an audience boo, hiss and hate him with the burning fire of a thousand suns. So when the Karmic Hammer falls and the time for his comeuppance finally arrives, the audience is going to sit back and bask in the satisfaction that can only come from watching a Complete Monster get what he so richly deserves, up to and including a highly ironic and gruesomely appropriate death.

Only... that's not what happens. He doesn't get what he deserves. Instead, he gets away scot-free, thumbs his nose at the hero, dons his baby seal cape (made from baby harp seals he personally skinned alive), and walks off into the sunset.

And this isn't the comic book villain who has to escape, so he can come back and be thwarted by the hero time and time again. No. This is it. This is all there is to the story. The show is over. The book is finished. The author isn't going to write any more. The Word of God has been spoken. The villain has become a Karma Houdini.

So how does such a black-hearted scoundrel get away with it all and escape his justly-earned retribution? There could be a number of reasons.

Needless to say, this is an easy and common way to make your already despicable villain even more despicable.

Compare Butt Monkey, for which a character ends up having many disproportionately bad things happen to them throughout the story (and may also technically qualify for this trope, as hard as that sounds). The extreme counterpart of that trope, Cosmic Plaything, can be considered this trope's polar Opposite Tropes.

Contrast Laser-Guided Karma for instances where the villain's comeuppance is swift and immediate, and Karma Houdini Warranty, for when a notorious Karma Houdini's luck finally runs out.

Examples of Karma Houdini are listed on these subpages:

Retrieved from "https://allthetropes.org/w/index.php?title=Karma_Houdini&oldid=1934011"
Categories:
Cookies help us deliver our services. By using our services, you agree to our use of cookies.