Everything About Fiction You Never Wanted to Know.
Jump to navigation Jump to search
/wiki/Ringo Starrcreator 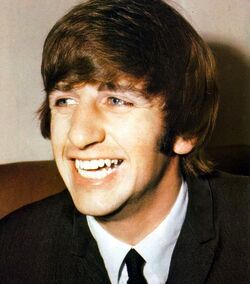 Ringo Starr in his youth...

Ringo Starr (born Richard Starkey July 7, 1940) was the more notable of the two drummers for The Beatles, replacing Pete Best. And he is awesome. Following his career with the Fab Four, he has had a very successful solo career.

Aside from his musical career, he's also a pretty accomplished actor, starring in the prehistoric comedy film Caveman, and had a co-starring role with Peter Sellers in The Magic Christian, and has appeared in many other films over the years.

Some see him as the the Beatles' Garfunkel, having only been credited for writing two Beatles songs which are mostly viewed as Album Filler (although "Octopus' Garden" appeared on a Greatest Hits Album). Ringo himself is often very Self Deprecating about this. The other Beatles tried to avoid this, however, by giving him at least one song to sing on every album, and have repeatedly declared his importance for the band in interviews. John Lennon, who often hired Ringo as his drummer after the breakup because he had gotten used to his groove, noted in an interview that "Ringo's a damn good drummer. He always was a good drummer. He's not technically good, but I think Ringo's drumming is underrated the same way as Paul's bass playing is underrated."

Oh, and did we mention he provided narration for a large number of episodes in the Thomas the Tank Engine series, and also played the Conductor?