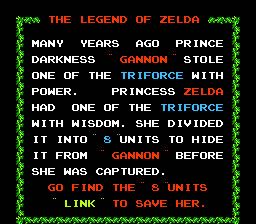 Clark Kent: Mix-Ill-Plick?
Mr. Mxyzptlk: NO! Repeat after me, bright boy. It's MIX--YES--SPIT--Lick.

In every community for every series, there are common mistakes. Someone could use the wrong romanization of a character's name, or think that the title referred to the main character, or insist on spreading a rumor about the plot until everyone believes it.

To Canondorfs, this can get annoying. It pushes fans' Berserk Button enough that people that continue to perpetuate it are treated with the same respect as a Troll, although many times they merely made an honest mistake. As the following examples demonstrate, however, many other times the purists are not railing against mistakes, but against things which are not technically wrong, such as dub names, simply because they happened to dislike the alternate adaptation.

The trope name comes from The Legend of Zelda forum that lays out ground rules about obvious false rumors (like that a cover song was produced by a different band from the one that actually did it, that Link's name is Zelda, etc.) and shuns people that continue to spread them. Also, as shown by the picture above, in one version of one game, the Big Bad Ganon's name was misspelled as Gannon; so referring to him as Gannon (instead of Ganon) is also something likely to get you banned. Of course, the list does have things like "Claiming Zelda II is anything other than the best Zelda game ever" and calling The Legend of Zelda CDI Games "epic", so there's a strong hint of Stealth Parody present.

See Also: Fandom Heresy, I Am Not Shazam, Internet Backdraft, Media Research Failure and Refrain From Assuming. An in-media equivalent would be Insistent Terminology. For Cannons that are banned, see Fantasy Gun Control. If Canon is banned, it's Canon Discontinuity.

Not to be confused with Banning Ganon, who's a Complete Monster and clearly deserves to be Ganon Canned.

Doesn't seem to be related to Gannon Car Rentals. Or Gannon University, for that matter. Or Officer Bill Gannon from Dragnet.

When adding examples, please keep in mind that this trope covers audience and fandom reactions. It is not intended to be a catalog of misspellings, misconceptions, and common errors.

Examples of Gannon Banned include:

It can also be inverted in real life, when hardcore fans or self-professed Internet scholars attempt to use the "original" Japanese name for anime/game characters around people who have only watched/played the Western version of said show/game, and are completely bashed for being total dorks. Another example suggests that you should never use the Western names for Pac-Man ghosts when taking part in online Pac-Man fan conversations—a corollary to that should be that you're better off not using anything OTHER than the Western names (more specifically, the nicknames Inky, Blinky, Pinky, and Clyde) when talking about Pac-Man to 90% of the people you will actually meet in real life.
In English-speaking circles, going out of one's way to use the Japanese words for things that are typical of anime in general when the English equivalent would suffice is considered to reflect poorly on the speaker; for instance, saying you dig vampire catgirls isn't a big deal, but going to the trouble of saying kyuuketsuki nekomimi-shoujo will put you on the Chumptrain to Douchetown.

"Chrno" can cause some confusion, too, if you misread the ch as the one from "child" not the one from "chaos". Coincidentally, "czrno" is the Slavic word for "black"... which is also what "Kurono" means in Japanese.

Oh by the way, which one's Pink?