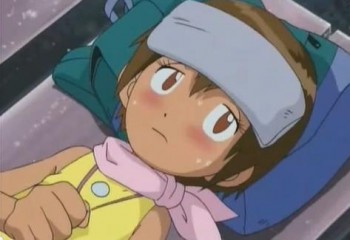 The ill girl is almost inevitably a sympathetically cute girl.[1] The disease can be anything from anemia to organ failure. Smart writers avoid such specifics, making it a Soap Opera Disease. It will never disfigure or impair her cuteness, but usually prompts an older brother or sister figure into shady business to help pay the medical bills. Or prompts them to rush into some dangerous/brave deed while she cheers them on.

A common cliche is the character being sick in autumn, noticing leaves falling off a tree by the window, with the prediction/hope she'll at least stay alive long enough to see the last one fall. This is taken from the O. Henry story "The Last Leaf".

This character type is probably indirectly descended from the Western romantic "consumptive heroine" (most recently seen in the form of Nicole Kidman's "Satine" in the film Moulin Rouge).

Examples of Ill Girl include:

This appears to be an empathetic illness, at least in the manga. For several volumes Hyatt went some time without her usual blood and death routine, but the revelation that the competent Excel was an impostor brought it back.

Retrieved from "https://allthetropes.org/w/index.php?title=Ill_Girl&oldid=1904781"
Categories:
Cookies help us deliver our services. By using our services, you agree to our use of cookies.