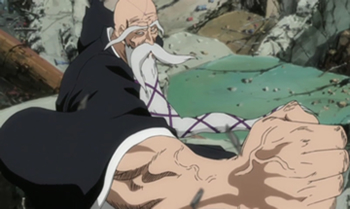 For God's sake, get off his lawn.

When it comes to fiction, more often than not the oldest, apparently feeblest characters are the ones to be feared the most. They kick ass, take names, and can fend off armies single-handedly.

They can be the strongest character in the entire story. The reason for this is obvious: "Experience and treachery will beat youth and enthusiasm every time." Old men in a dangerous line of work have been doing it for a very long time. Additionally, in a Crapsack World, or when Earth Is a Battlefield, a man may well only live to be old if he is already very bad-ass to start with.

The defining characteristic of the Badass Grandpa is that, as the story begins, they already have several or max levels in Badass, and will almost always have more than anyone else, including, in many cases, the Big Bad; yet they generally opt for quiet and simple lives, sharing their wisdom with younger generations rather than directly involving themselves. After all, every generation of heroes has to grow up and fight on their own sometime, right?

Badass Grandpas hide their power level well...at least until it really matters. When the chips are down, and even The Hero looks like he's in need of assistance, it's time for the Badass Grandpa to step up and throw down, proving that age has done nothing to quell their ability to take down Big Bads literally decades their juniors. Even then, it's still the hero's job to ultimately save the girl and the day—otherwise, they aren't The Hero, now are they?

A Badass Grandpa may be The Patriarch of a Badass Family.

Is often The Obi-Wan on steroids. Might overlap with Good Is Not Dumb. If it's an old woman who is the badass, it becomes Never Mess with Granny. May overlap with Badass Bystander. If it's an evil person that ruined countless lives and still survived, see Evil Old Folks.

Examples of Badass Grandpa include:

Retrieved from "https://allthetropes.org/w/index.php?title=Badass_Grandpa&oldid=1937457"
Categories:
Cookies help us deliver our services. By using our services, you agree to our use of cookies.