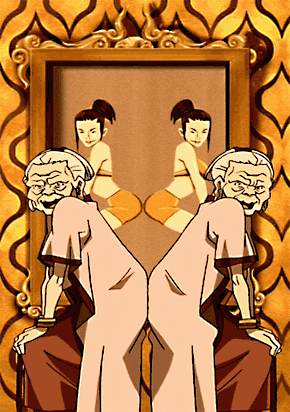 You all know them, that kindly old lady who lives down the street. The tiny, wrinkly, owner of the local Dojo. The aged, fading seductress. Crotchety old guy who lives at the end of the street. Wrinkled, old, musty... but they weren't always that way.

Once upon a time they were attractive, very attractive. This will be revealed to the rest of the cast if they ever run into a Fountain of Youth, or via old photographs or perhaps just to us the viewers in a Flash Back.

Contrast She's All Grown Up, Grandma, What Massive Hotness You Have!, Really Seven Hundred Years Old, and I Was Quite a Fashion Victim.

Related to I Just Want to Be Beautiful when the character misses his/her old beauty.

Not to be confused with the Pokémon Platinum character.

Examples of I Was Quite a Looker include:

In one (rather strange, even by Ace Attorney Standards) commissioned side-story involving the ghost of Wendy's Identical Grandmother and said grandmother's lover (very, very long story) proves that Wendy was right about being attractive.

Roy's dad shows him a picture of mum in a bikini.

Retrieved from "https://allthetropes.org/w/index.php?title=I_Was_Quite_a_Looker&oldid=1918549"
Categories:
Cookies help us deliver our services. By using our services, you agree to our use of cookies.