Seen It a Million Times 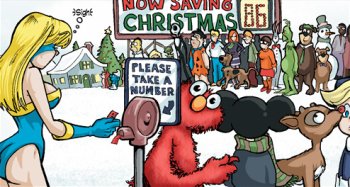 Saving Christmas is just that common.

"This is like that episode of... well, everything."
—Malcolm after scheduling a Two-Timer Date, Malcolm in the Middle

Hey, You Know That Thing Where the one guy does the thing to the other guy, and then that stuff happens? Yeah, that one! Man, that one's great! I can't believe we don't have this one already! I'd better suggest it.

For example, The Girl gets Prince Charming and lives Happy Ever After: The lead character in the story is female, and the main love interest is a Prince of some sort. Seen in "Cinderella", "Snow White", Sailor Moon (sorta), etc. The lead female may or not be a princess herself. She is just as likely to be firmly planted in the lower caste.

Also seen a million times is Save the Princess: The lead hero, usually male, rescues The Princess against all odds and overcomes the evil kidnapper. Seen in Mario, The Legend of Zelda, Resident Evil 4 (President's daughter = princess), Chrono Trigger (though it's just part of the main plot), Kingdom Hearts, etc. You just know that if there's a princess in a video game, you will probably have to save her at some point.

Another is "Rivals Joining Forces": The main good guy, and a previous main bad guy, are suddenly faced with a new, overwhelmingly powerful threat that aims to destroy them both. So what do they do? They join forces! Seen in Dragonball Z, Sonic the Hedgehog, etc.

Many tropes fall into the category of "Seen It a Million Times" which, in itself, is part of what makes them tropes to begin with. With Seen It a Million Times, in particular, the trope in question has become so predictable that the viewer pretty much already knows how the plot will go upon seeing a few key elements of the tropes.

Ironically, if you've Seen It a Million Times, you may actually struggle to think of examples, because you've stopped noticing it; it's just what happens.

Compare No Trope Is Too Common, Discredited Trope.

Contrast Too Rare to Trope, People Sit on Chairs, Not a Trope.

Not to be confused with Saw Star Wars 27 Times.