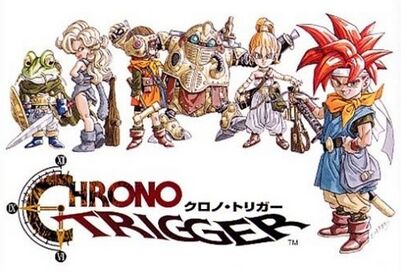 Crono thought it was going to be an ordinary day. He was having fun at the Millennial Fair (celebrating the dawn of the year 1,000 A.D.), he had met a cute girl named Marle, and everything was looking good.

Then his best friend Lucca's new teleportation device went out of control, sending Marle to parts (and times) unknown and drawing him into a multi-generational struggle to save the entire world from obliteration.

This is the setup for Square's SNES RPG Chrono Trigger. Released in North America 1995, Chrono Trigger was the last hurrah for the golden age of epic fantasy RPGs on the SNES (and the final game in a sequence of Squaresoft releases that included games such as Final Fantasy VI and Secret of Mana). Chrono Trigger joined the likes of Final Fantasy VI, Super Mario RPG and other famous SNES RPGs as a popular game which no one could be arsed to market for Europe (things did get better though).

Crono and his friends are fighting to save the world from destruction at the hands of an extraterrestrial creature known as Lavos, which descended to Earth in the prehistoric era (65,000,000 B.C.) and -- if Crono and his friends don't interfere -- will rise again in 1999 to bring about an apocalypse. To save the world, Crono and the gang travel from era to era via special portals (and, later, a specially-outfitted airship); in addition to previously-mentioned eras, Crono and his friends also visit the Middle Ages of 600 A.D. (where humans battle the monstrous Fiends), the dark and ruined future of 2300 A.D. (where the disenfranchised survivors of the Lavos apocalypse eke out a precarious existence against genetic mutants and psychopathic, genocidal robots), and the mysterious Age of Magic in 12,000 B.C. (where the inhabitants of the Floating Continent of Zeal attempt to harness the dormant power of Lavos for their own ends). In between, they'll meet lots of interesting characters... oh, and did we mention the fighting? There's lots of fighting.

The game was followed up with two sequels: Radical Dreamers for the SNES (which has not seen the light of day outside of Japan... though a translated ROM is available online) and the sequel Chrono Cross. The original game has a PlayStation port that added some additional anime cutscenes and a little bit of modification to the plot to get it in sync with Chrono Cross (which, at the time of the port's Japanese release, was still in development); this port also came with massive technical problems and is generally considered a waste of time. The long-awaited Updated Rerelease was published in America late 2008 for the Nintendo DS, which retained the good parts of the PS1 port, retranslated the script to overcome the hurdles of mid-1990s memory limitations/censorship, and threw in some bonus dungeons and a new ending for good measure; surprisingly, it even saw a European release in 2009.

A fan-made Interquel connecting this game with the events of Chrono Cross, known as Crimson Echoes, was in the works; sadly, it received a cease-and-desist from Square Enix just as it neared completion. Square Enix's motives for doing so remain under speculation, but the game can still be played if you can find the leaked ROM on the Internet.

If you were looking for an anime about a nun and a demon, you want Chrono Crusade.

Chrono Trigger is the Trope Namer for:
Tropes used in Chrono Trigger include:
Retrieved from "https://allthetropes.org/w/index.php?title=Chrono_Trigger&oldid=1811438"
Categories:
Cookies help us deliver our services. By using our services, you agree to our use of cookies.