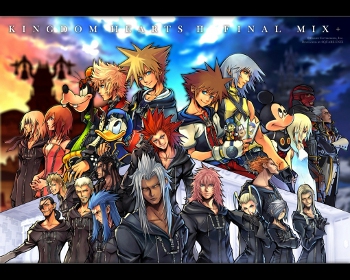 Kingdom Hearts started out as the ultimate Crossover game: a fun, dynamic game with platforming elements and a solid plot. The first installment was followed by a number of sequels, all of which provided Retcon moments for previous games and added Loads and Loads of Characters. The series is known for its memorable scenes, its elegant fighting system and its balanced difficulty level. At the same time, more recent installments are infamous for having one hell of an intertwined plot, spread across many different games on 6 (soon to be 8) different consoles... which can get really confusing if you don't come at it systematically, and even that's no guarantee that you'll understand it.

The main story is a game equivalent of a Trapped in TV Land situation. Characters from classic Disney films (animated as well as live-action) and characters from Final Fantasy games are cast out from The Theme Park Version of their universes, and end up trapped in a joined world. There, they meet an Animesque hero in Mickey Mouse pants named Sora, who hits inky black creatures with a giant key. Joining him are two other original characters: Kairi, a sweet young girl, and Riku, a cocky teen who, despite having a good heart, decides to explore villainy. The series' first sequel, Chain of Memories, added a group of troubled people called Organization XIII, who quickly joined the main cast from Kingdom Hearts II onwards.

With a strong focus on The Power of Friendship, the game's combat is bloodless, yet action-oriented and extremely fun. The interaction between the two franchises, in particular, warmed the hearts of many gamers: for long-time fans, much of the game's fun is in seeing Disney's Merlin befriend Cid Highwind, Auron fighting Hades, and Squall working on a mission with Tron. The combat system got extremely shiny and slick in Kingdom Hearts II, adding more situational abilities, more strategy, more speed, and almost doubling the number of enemies on screen during battle. Still, the series' content is appropriate for any age—but don't underestimate the Nintendo Hardness of some games because of that.

Proving incredibly popular, it has now become one of Square Enix's and Disney's flagship series.

The series consists of the following games:

The series contains appearances by characters and locations from the following games, films and franchises. Labeled after each is which game it appears in, abbreviated, and its role. (w) for "world" means you visit the location and can explore. (c) for "character" means only that characters from that franchise show up, whether in the form of a summon, or you meet them in person. (r) for "reference" means merely that the franchise is referenced in some way, such as art or architecture, or the world shows up in a non-interactive form.

Kingdom Hearts is the Trope Namer for:
The following tropes are common to many or all entries in the Kingdom Hearts franchise.
For tropes specific to individual installments, visit their respective work pages.
Retrieved from "https://allthetropes.org/w/index.php?title=Kingdom_Hearts&oldid=1855473"
Categories:
Cookies help us deliver our services. By using our services, you agree to our use of cookies.