Everything About Fiction You Never Wanted to Know.
(Redirected from Dragonball Z)
Jump to navigation Jump to search 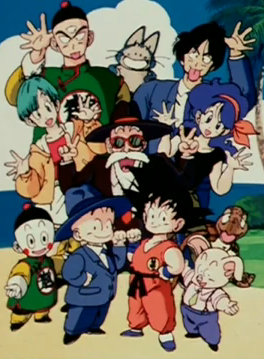 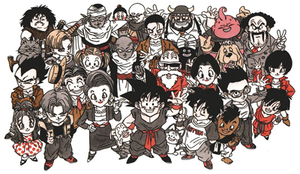 After several years of no new media beyond video games repeating the history, a reunion OVA Dragon Ball: Yo! Son Goku and His Friends Return!! was produced and a Massively Multiplayer Online Role Playing Game, simply titled Dragon Ball Online was released. While the MMO was short lived (thanks to poor reception of its gameplay) and never released outside of Asia, Dragon Ball Online was noted for including series creator Akira Toriyama, as one of lead designers of the game. Toriyama had noted the plot of the game is considered canon to the world of Dragon Ball.

After the Kai re-release brought the series back into the public consciousness, a new movie, Dragon Ball Z: Battle of Gods, was released. It was followed by another new movie Dragon Ball Z: Resurrection "F". Unlike the previous movies, these two are canon, and were followed by new TV series Dragon Ball Super. Just how much of Toriyama's plot from Online is still canon remains to be seen.

Dragon Ball Xenoverse and its sequel salvage many elements of Online‍'‍s plot and includes it in the post Battle of Gods canon. However, like most spinoff media, Toriyama only served an advisory role with minor art design.

The success of Dragon Ball is hard to dispute -- it became one of the biggest hits ever in Japan, it was the series that popularized manga and anime the most in Europe, Americans always have an idea of what it is when they hear its title, every single Latino who grew up during the '90s has watched it, it's still running on TV internationally and merchandising is alive and well. It is sometimes derided for being simplistic and for drawn-out multi-episode fights with little story progression. However, one must keep in mind that the show is primarily aimed at kids and teenagers, with older adults not really in the picture. Dragon Ball is supposed to be fun and thrilling, and it generally achieves this.

There were many Non-Serial Movies (only a few could be wedged into the series' timeline) released at least once a year, three set in the Dragon Ball timeline and thirteen for Dragon Ball Z. Two made-for-TV movies were made for Dragon Ball Z, which are technically in canon. There was also a seventeenth feature film based on the original series produced to commemorate the tenth anniversary of the franchise, as well as a web special in 2008 produced to commemorating the 40th anniversary of Shonen Jump.

Now also has a Spin-Off manga called Dragon Ball SD in Saikyo Jump by Naho Ooishi, which began on December 3, 2010, exactly 26 years after the first chapter of the original series was first published in Shonen Jump. As of June 21, 2011 there's another Spin-Off called "Episode of Bardock", What If Bardock survived, also by Naho Ooishi; later in the same year the Bardock short received an Animated Adaptation, and Shueshia started to reprint brand new copies of the original manga, all of it in its original 42 Volumes glory, although with a different stylized logo for "Dragon Ball".

Dragon Ball is the Trope Namer for:
Tropes used in Dragon Ball include:
Retrieved from "https://allthetropes.org/w/index.php?title=Dragon_Ball&oldid=1962679"
Categories:
Cookies help us deliver our services. By using our services, you agree to our use of cookies.