So Bad It's Horrible 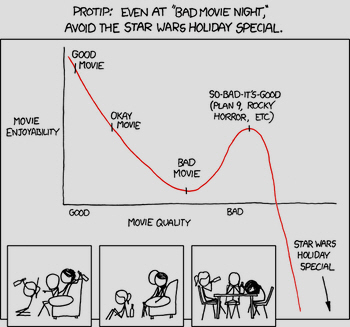 You think it's so legendarily bad that you'll torrent it and sit through it just for the kitschy nerd cred. I, too, once thought as you did.

A work that wraps around the awfulness scale to good and keeps going all the way back down until it's even more awful than the average victim of Sturgeon's Law. These works don't attract proper fandoms and aren't enjoyed in themselves — they have neither the good points of a good work or Guilty Pleasure nor the charm of a So Bad It's Good work; they simply draw attention out of a perverse sense of fascination.

If you plan to seek out these works, note that prolonged exposure can cause wooziness, depression, weakening of one's grasp on reality, and banging your head against the wall repeatedly.

Works this bad are found in nearly all media, but the basic "I can't watch, but I can't look away" properties are constant enough for them to be united under one name. For all intents and purposes, such strokes of anti-genius are unique — the way they fit together (or fall apart) can't be reproduced. Moreover, if it's impossible to imagine a parody of it, it probably counts.

From another perspective, consider a possible negative value on the classic "5-star" scale (and there's a film website which does exactly that). The farther away the work in question scores from zero, in either direction, the more entertaining it is to watch. The closer to zero it is, the more it tends towards this Trope.

Horrible works can have enjoyable reviews, as they allow a reviewer to exercise his/her writing skills to the fullest. If the reviews are uniformly more entertaining than the work, then the work is almost certainly horrible. Occasionally, you'll see one (or miraculously two) slices of Ham and Cheese to enjoy. Some, but not all, examples of this Trope can be MSTed well.

While these works may insult their respective forms of media, they serve an essential purpose — after all, without the "0", a perfect "10" would have little meaning.

The "really bad" stuff has been broken down by medium. Please remember to add only outstanding examples of suckitude to each of the individual categories. Just because you and some people you know don't like it doesn't mean it's Horrible. This is not the same as Complaining About Shows You Don't Like, since popular series are by their very nature excluded from this Trope; see Hype Backlash instead. Likewise, don't remove something from the lists unless you and several people you know think it's pretty good (NOT So Bad It's Good).

Here are some guidelines to help:

Also, keep in mind that just like any good work has to stand the test of time for its quality, so does a bad work. Sometimes the work could be incredibly misunderstood at the time of its release, or it could just grow on people. So when adding things, don't just rely on reviews and opinions from the time the work was released. Try to find some modern opinions on it as well; you might find that the work actually does have a fanbase.

Also, don't start edit wars. If somebody challenges a claim, don't try to pull the "it's only you" crap. Civility isn't something Darth Wiki allows a pass on, especially since too much bile got this page Red Linked in the past. If you want to debate whether or not a work belongs here and why, then do it in discussion.

Contrast So Cool Its Awesome. Compare Muse Abuse, which may occur both on this side of qualifying for actual artistic talent and its extreme opposite. See also Suckiness Is Painful, when fiction treats these works as actually being dangerous. If one episode or part of a work is this, see Wall Banger. Most film examples are also Box Office Bombs.

Important Note: Merely being offensive in its subject matter isn't enough to justify a work as Horrible. Hard as it is to imagine at times, there's a market for all types of deviancy (no matter how small a niche it is). It has to fail to appeal even to that niche to qualify here.

Another Note: Adding your own work - fan or pro - to this list is effectively an admission that you are (or were) a bad writer.

Examples of So Bad It's Horrible are listed on these subpages:

So Bad It's Horrible

Retrieved from "https://allthetropes.org/w/index.php?title=So_Bad_It%27s_Horrible&oldid=1821308"
Categories:
Cookies help us deliver our services. By using our services, you agree to our use of cookies.